My parents used to take photographs and have them processed as 35mm slides … it seems that was the thing to do in the 1960s and 1970s, and about a year ago, my sister, brother and I had the full collection of family slides digitized. The collection dates back to the time of my parents’ marriage in 1962, and goes up through the early 1980s. There’s a lot of interesting pictures, many of which will probably remain somewhat mysterious, since my Mom lives in a different state and doesn’t have the time to tell me the details about every picture (there’s thousands of them). At any rate, I like looking through them, many of which feel like artifacts since a group of them were taken before I was born.

Here’s one, for example, that caught my eye, and I believe it dates from 1967, and I’m guessing it’s somewhere in Iowa. I have a habit of seeing things that remind me of famous art works, and this particular picture reminds me of not one, but three different photographs by Diane Arbus. Check out my family photo, and then scroll down for more … 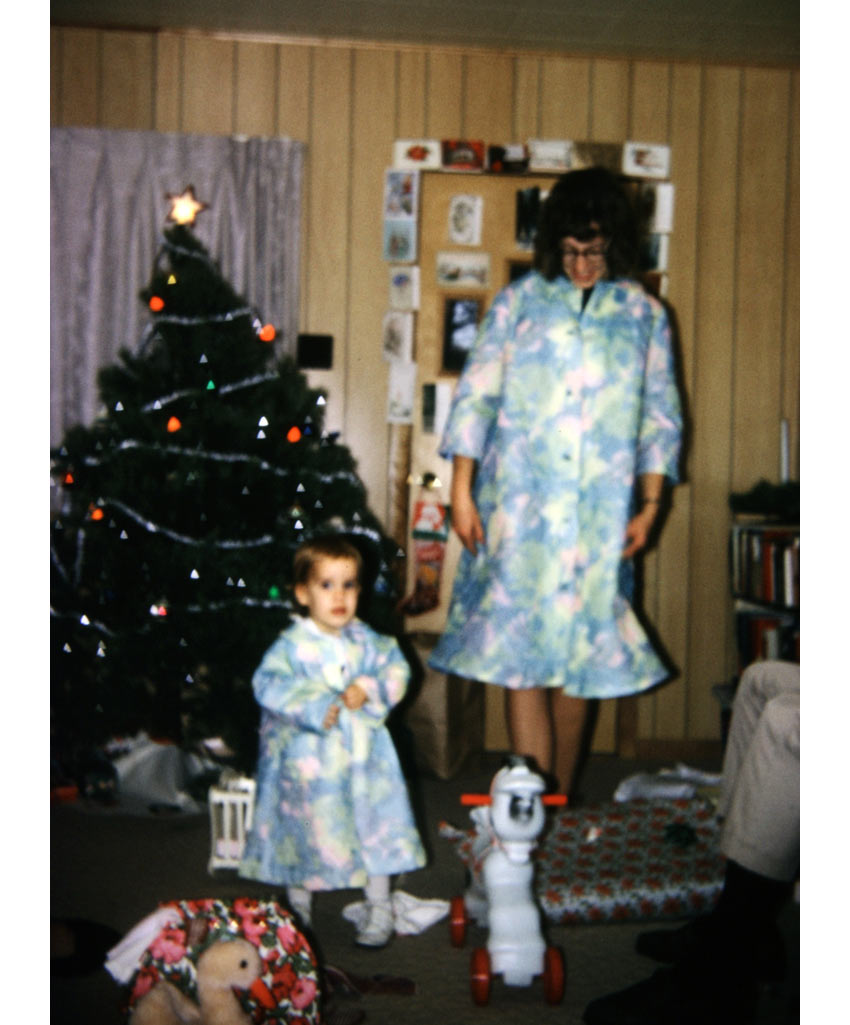 The first thing that grabs the attention is the matching outfits … I have no idea why my aunt and my older sister (as a two year old?) have matching outfits, but it made me think of Diane Arbus’ photo “Identical Twins,” coincidentally also from 1967, and also featuring two people in matching outfits.

Then, the simple inclusion of a Christmas tree on the left side of the picture makes me think of Arbus’ 1962 image titled “Xmas Tree in a Living Room, Levittown, New York.” I know there’s not a whole lot of similarities between these Christmas trees, but since I was already in a Diane Arbus mindset, I thought of that one.

Lastly, and apologies in advance to my aunt – but her height in comparison to the Christmas tree, the door frame behind her, and my sister below her, reminded me of Diane Arbus’ 1970 image “A Jewish Giant at Home with his Parents in the Bronx.” Of course my aunt is not a giant, and she’s not about to hit her head on the ceiling like the giant, but again I’m in an Arbus mindset, so I’m just explaining my visual associations.

In a New Book About Unions and Financial Capitalism, Lessons for the Arts

In a New Book About Unions and Financial Capitalism, Lessons for...

Sculptor Guide - August 8, 2020
0
Thanks for subscribing! Please check your email for further instructions.