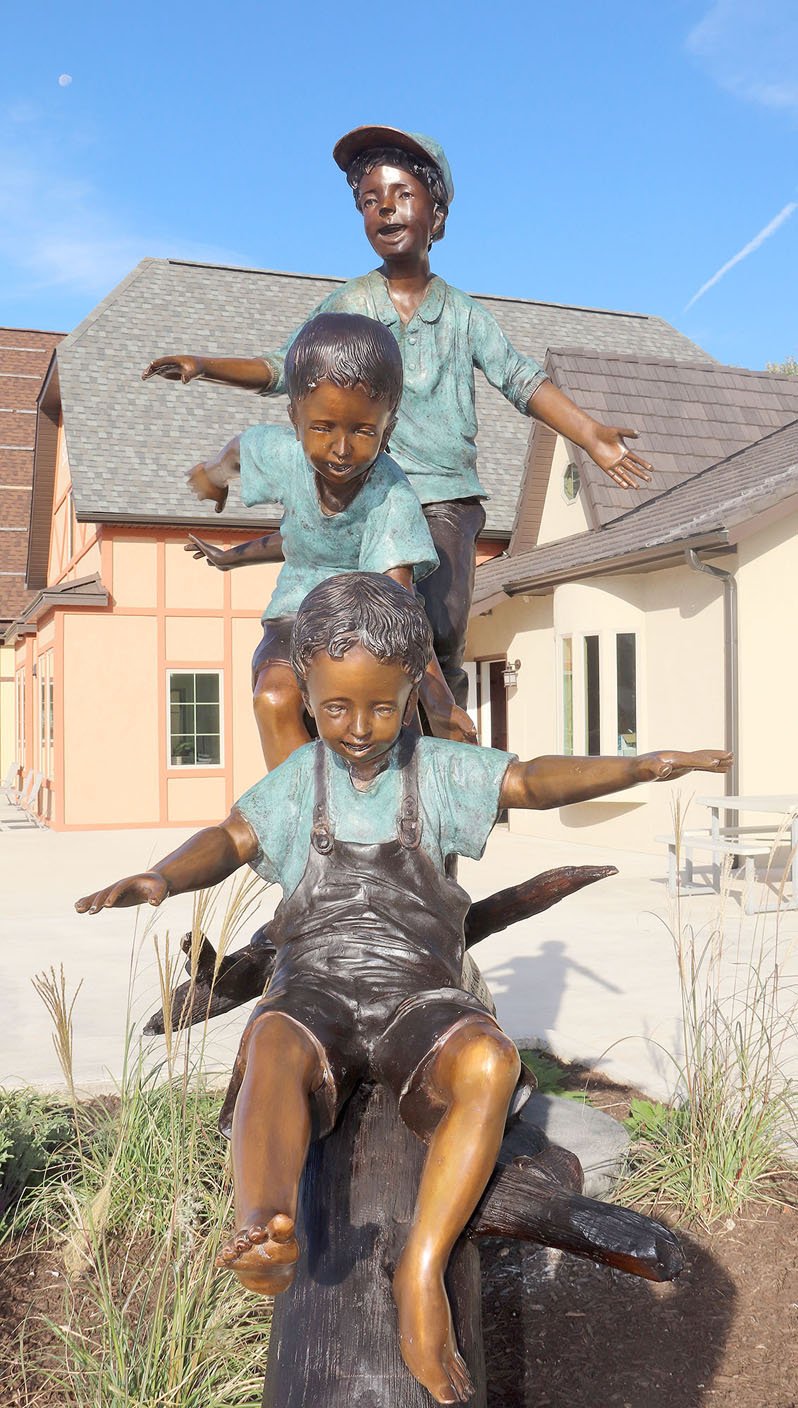 LYNN KUTTER ENTERPRISE-LEADER The faces of the children of a new sculpture in Farmington show the joy of playing outside and playing with friends. The sculpture can be seen in front of Farmington Village on Main Street.

FARMINGTON — A new bronze sculpture depicting four children and a puppy playing together on a log is meant to be a centerpiece for the new Farmington Village development on Main Street, said Larry Bowden, owner of the center.

“I intended for it to be something that people could reference to when talking about this place,” Bowden said. “Look for the statue of children.”

Bowden said from his years with corporations and traveling all over the word, he intentionally wanted the sculpture to be diverse with children representing different races and ethnicities. He said he also wanted a puppy in the sculpture.

“It ended up being a lot of fun,” Bowden said about his search to find the right sculpture for Farmington Village. “I like it more than I thought I would. It came out really well. I want it to be kinda fun, that when people look at the faces (of the children), it makes you smile a little bit.”

Bowden said Richard DeVuono of Orlando, Fla., designed the sculpture and it was created by his in-house sculptors. DeVuono has a master design with the log as a foundation and a customer can select what figures to go on the log. The custom work on the sculpture for Farmington Village is the faces of the children and their diversity, Bowden said.

The sculpture was manufactured in Asia. Bowden said it took nine weeks to ship the statue from Bangkok to Los Angeles to Oklahoma City, Springdale and then Farmington. It was installed last week.

Bowden said the sculpture will have lights so it can be seen during the evenings. He also plans to install a bronze watering station for dogs.

From the beginning, Bowden’s vision for Farmington Village has been that it would be a gathering place for the community. The front of the development has a large concrete courtyard and he said he sees that as a place for festivals or fairs.

A pavilion is under construction behind the development and that will be another gathering place, as well as part of the new Damon’s BBQ & Grill restaurant. Bowden said he hopes the restaurant will open by the end of the year.

Another idea for Farmington Village, Bowden said, is to provide a pathway from the center to the city’s Creekside Park, located just to the north. Bowden said he hopes families will play at the park and then walk to the village for ice cream or dinner.

Director unloads on artist who cancelled due to smoke