Dr. Kimberly Brown Pellum, a Florida A&M University history professor,  served as the model for a Rosa Parks sculpture recently unveiled in Montgomery, Alabama. The sculpture commemorates the 64th anniversary of the day police arrested Parks for refusing to give up her bus seat, then igniting the year-long Montgomery Bus Boycott. 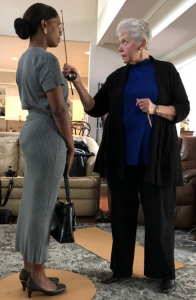 The sculptor had asked Dr. Felicia Bell, director of the Rosa Parks Museum at Troy University last summer, for a model that was the approximate age of Parks in 1955 and shared Parks’ general characteristics. Bell then recommended Brown Pellum, who was also working in the museum at the time and matched the sculptor’s requests.

Upon receiving the news, Brown Pellum then studied Life magazine photos and wore a dress similar to Parks’, along with 1950s shoes she borrowed from a local theater company. She even pulled her hair into Parks’ distinctive bun with help from an 86-year-old Montgomery hairdresser who used to style Coretta Scott King’s hair in the 1950s.

“Mrs. Parks’ work is central to everything I teach,” said Brown Pellum. “This moment was symbolic of all I hope for in preserving Black women’s stories. No one can ever again walk past that spot without acknowledging her. And I got to be a part of it. It’s truly a dream, but also a profound reminder that we all have an unending role in safeguarding and narrating the journeys of our ancestors.”

Books That Changed Me: Maria Lewis

Stories to get you through the summer

Sculptor Guide - January 2, 2020
0
Thanks for subscribing! Please check your email for further instructions.