As is typical with some of my blog posts, the idea starts in one place and ends in another. It started with reading about 150,000 botanical illustrations entering the public domain via the Biodiversity Heritage Library, and ends with a story about a “convict artist” named Thomas Watling who made these incredible studies of birds in Australia. At left is a “Maenura Superba (Lyre Bird),” one of the world’s largest songbirds which is known for its elaborate tail and courtship displays. At right is a “wedge-tail mountain eagle,” which is Australia’s largest bird of prey, with a wingspan of nearly eight feet!! Scroll down to read more … 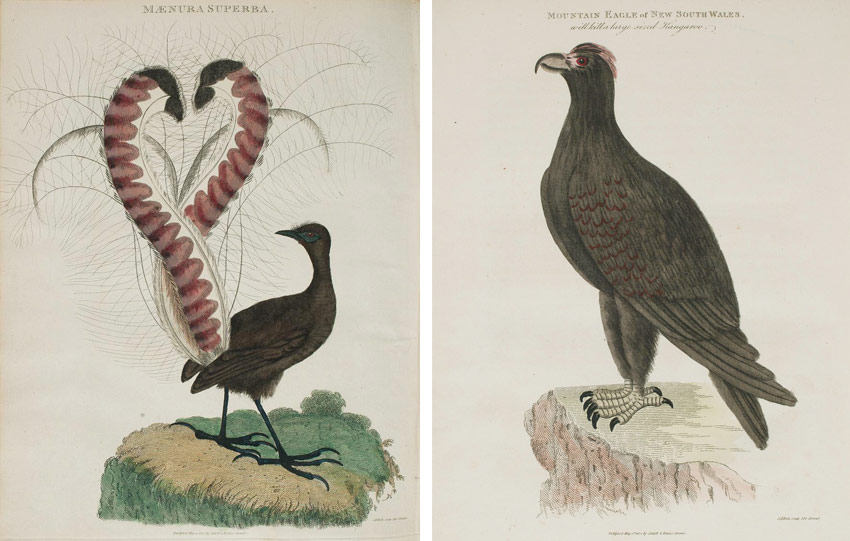 As I was looking through the public domain images, I saw the image above left reproduced in a publication titled “An account of the English colony in New South Wales, from its first settlement in January 1788 to August 1801.” The artist is Thomas Watling (1762 – 1814), and he has an interesting story. From what I can gather, he lived and worked in Glasgow (Scotland) as a “chaise painter,” which I assume means that he painted the finishes on chaise lounge furniture. But he also used his artistic talents to forge promissory notes from the Bank of Scotland, which are kind of like checks, promising payment to someone. He was convicted of forgery, and sentenced to 14 years in Australia, which is something they did back in the late 18th and early 19th Century.

He was assigned to work with John White, an enthusiastic naturalist, who kept a journal in which he made many notes about birds that he observed near the penal colony in Australia. White encouraged Watling to draw and paint the birds, and the illustrations above come from that project.

I’d like to try to find more of Watling’s work, as it is noted that in addition to birds, he also painted mammals, fish, reptiles, shells, insects, and even some of the local Aboriginal Australians, with more than 100 works made while serving his sentence.

Did anyone write in ‘Kenobi’ on their ballot? – The Artsology Blog

Sculptor Guide - December 2, 2020
0
Thanks for subscribing! Please check your email for further instructions.