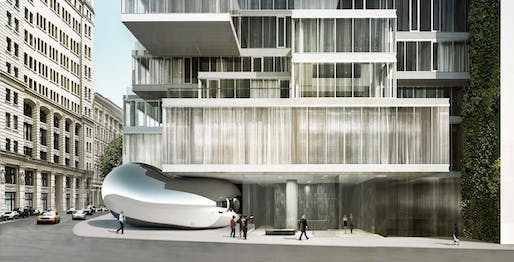 Alexico Group, the development firm behind Tribeca’s 60-storey “Jenga Tower”, a Herzog & de Meuron-designed residential high-rise at 56 Leonard Street, announced that it will start installing a public sculpture by Anish Kapoor commissioned specifically for the building in the second week of November.
— The Art Newspaper


Kapoor‘s shiny 56 Leonard bladder — resembling a smaller, squashed version of his Chicago “The Bean” landmark — made quite a splash in early renderings for the Jenga-like Manhattan condo tower in 2008, but overcoming various fabrication obstacles has not been easy and thus pushed back the final completion date of the development’s original vision.

“In order to make the Leonard Street sculpture installation more
expeditious, and to save costs, it was decided to build the precision
components such that they could be tightly fit together, with the seams
thereby becoming nearly invisible hair line cracks,” the sculpture’s fabricators, Performance Structures, Inc, explained in a statement published by Tribeca Citizen.

Similar articles on Archinect that may interest you…

MoMA Receives Donation of 100 Photos by Women Artists Spanning a...

Sculptor Guide - November 23, 2019
0
Thanks for subscribing! Please check your email for further instructions.