On the Vatican’s World Day of Migrants and Refugees, in September, Pope Francis unveiled a sculpture in St. Peter’s Square to commemorate the travails and hopes of displaced people through human history.

The arresting, 20-foot-tall bronze boat loaded with refugees and migrants is the work of Canadian sculptor Timothy Schmalz, known for his moving Homeless Jesus and Hungry and Thirsty public statues. This latest work, Angels Unawares, takes its name from the biblical imperative from Hebrews: “Be welcoming to strangers, many have entertained angels unawares.” 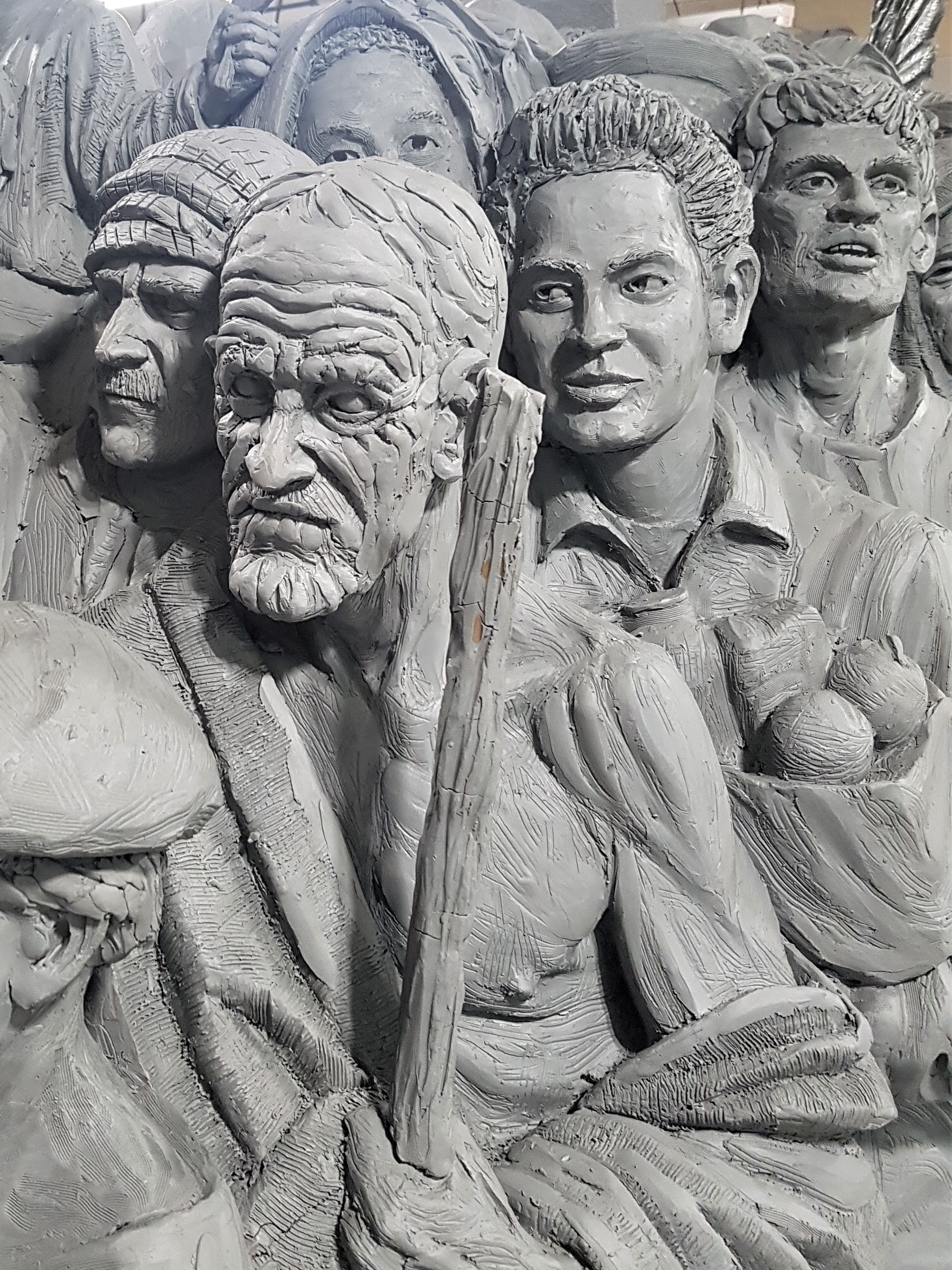 Among those adrift are Mary, Joseph and the infant Jesus crossing the border into Egypt to outrun Herod’s murderous decree; Native Americans hounded from their lands; Africans sold into bondage; Irish left destitute by the potato famine; Chinese laborers; Europeans escaping the religious wars and feudalism of the ancien regimes; Jews fleeing genocide; Vietnamese boat people; and — most pertinent to the current moment and the moral goad behind the sculpture — Syrians pouring out of the catastrophic civil war that has caused the largest refugee crisis of our time.

In this tangle of humanity en route, one comforting sculptural detail caught the eye of viewers and journalists who came to watch the unveiling: a small bag of food, containing bread and fruit, carried by an Italian emigrant.

“That bag is a metaphor of nourishment,” says Schmalz, “which can also be cultural and spiritual nourishment — the idea of bringing something to the table, not only food, but bringing abundance over, contributing in a sense. If you look at the way immigrants have contributed, it’s unbelievable. I made it a simple representation of bread and fruit to represent the food of all cultures.”

In tandem with the figure of an Irish boy positioned sanguinely at the front of the boat as a symbol of innocence and optimism, the bread-and-fruit motif encapsulates how food is interlocked with the history of human migration. It recalls the extreme scarcity that refugees have had to endure, while simultaneously serving as a piercing reminder that it is the very victims of famine, disease, war and heartbreak — people whom the pope called “the poorest of the poor” — who have immeasurably enriched global foodways by carrying their produce, seeds, farming techniques and culinary skills with them to their new homes.

The papery heads of garlic that immigrants stored in their trunks or the sesame seeds that West Africans brought with them on the inhumane Middle Passage have had the same transformative influence on food patterns as the packets of tea that Catherine of Braganza brought to England as part of her dowry, or the bags of fagioli that Catherine de Medici took to France as part of hers, resulting in that sumptuous Languedoc dish, the cassoulet.

To American viewers, Schmalz’s sculpture will inevitably evoke the defiant group of Church of England separatists who, with their pigs, goats, chickens, sacks of grain, crackers, salted pork, oatmeal, pickled foods and beer, pushed off from Plymouth in 1620 to seek a newer world, thus pioneering the trend for future acts of emigrant audacity and resistance.

No country has had its national menu more profoundly enriched by successive waves of immigrants than the United States. So much so that today, “Fajitas and General Tso’s chicken are certainly as American as apple pie — and even more so in terms of how frequently they are consumed,” writes Yale historian Paul Freedman in his panoramic new book, American Cuisine: And How It Got This Way.

The symbolic bread and fruit, like the biblical loaves and fish, have not just multiplied, but mutated into dishes that are axiomatically American. “Large meatballs accompanied by spaghetti, eggplant Parmesan, marinara sauce (first mentioned in 1930), and ricotta cheesecake are all American inventions,” writes Freedman. In terms of sheer popularity and restaurant presence, Chinese, Italian and Mexican form the holy trinity of immigrant foods, with chains like Panda Express, Olive Garden and Taco Bell offering menus that have been ingeniously adapted for the American palate. 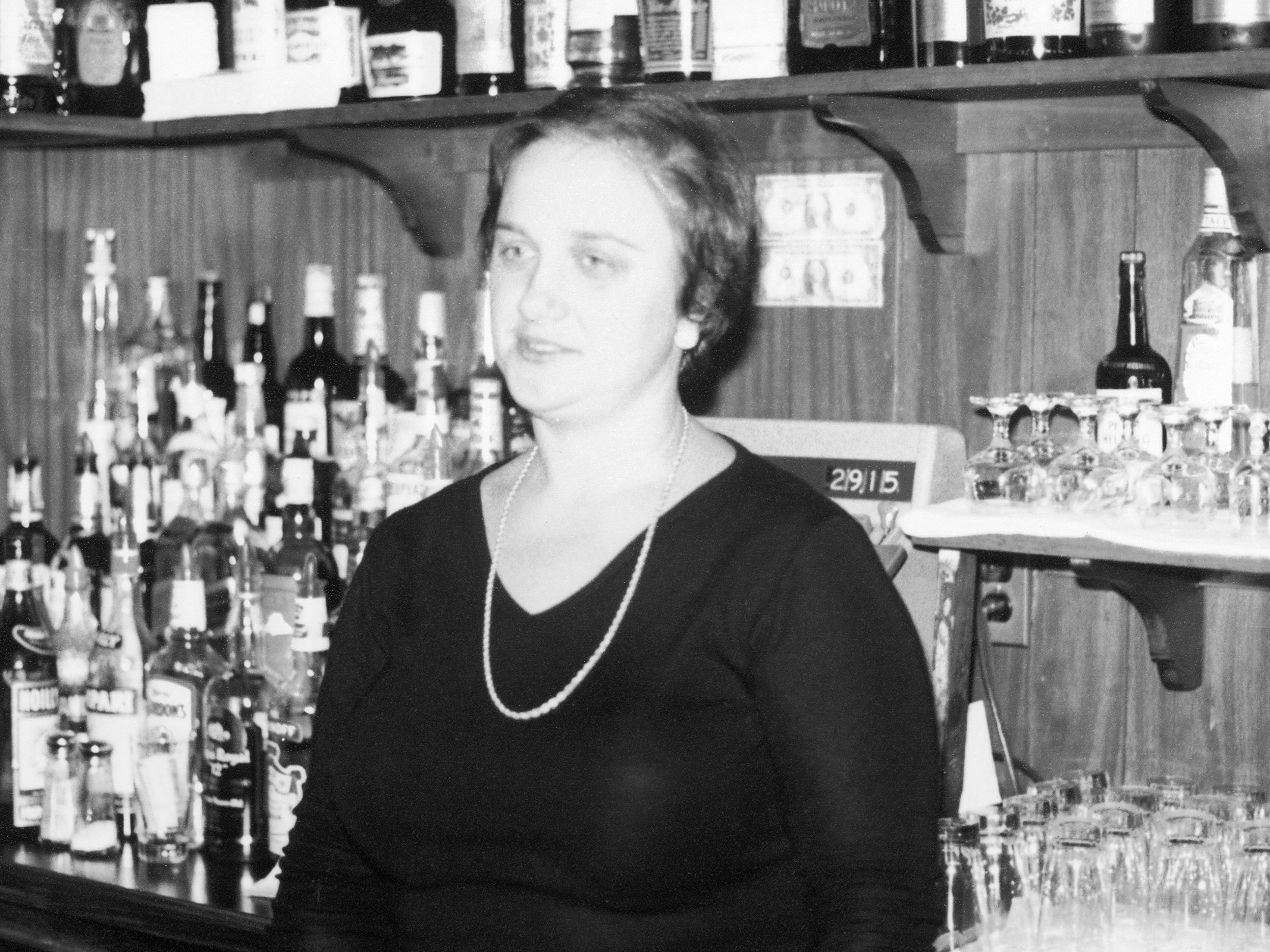 Among those who warmed to the bag of food is the grand dame of Italian cooking, Lidia Bastianich, who cooked for Pope Francis when he visited New York in 2015.

“I believe that the sharing of food is the identifying connector for all cultures, especially for Italians,” she told NPR. “As Italian immigrants ventured in search of a better life to America, they brought with them treasured Italian foods that had a long lifespan that could last the trip and beyond, items such as dried oregano and other herbs, cheese, salami, taralli (cookies), and olives. So, it is befitting that the sculpture at the Vatican identified the Italian immigrant carrying bread and fruits to their new home.”

Bastianich arrived in New York from Istria (then in Italy, now in Croatia) in 1958, when she was 12 years old. Sixty years later, she still savors the unique rapture of starting over in a new country. “As a young immigrant I did not feel any discrimination,” she says. “I recall the excitement of starting a new life full of opportunities and freedom. I did feel different, mostly because I did not speak the language and did not know some customs. However, I made it my business to learn and be accepted as soon as I could; I wanted to be an American teenager as fast as I could. To this day, I feel a tremendous sense of gratitude to America, a country that opened its doors, and to its people who accepted us and gave us an opportunity to start a new life. And, what a life we achieved! This could happen only in America! Mille grazie!”

Millions have prospered like Bastianich, whose restaurant-and-food empire noodles all the way from Boston to Brazil, even as others have been scarred by political hostility and social humiliation (not least for the fragrant smells of their foods). As the refugee crisis has burgeoned, the global debate around migration has become angrier, with entrenched camps of supporters and opponents facing off in private and public — a tension the sculpture captures succinctly, if inadvertently, through the pair of archangel wings billowing over the boat. Inadvertent, because though Schmalz never intended it, from a certain angle, an angel’s wing can look chillingly like a fin. It’s an unnerving but animating ambiguity that warns of the complex arc ahead. If the exiles survive the journey, the enigma of arrival will be shaped both by xenophobia and opportunity, rejection and acceptance, angels and sharks — which, sometimes, will come intertwined.

One illustration of this duality is the perverse way in which immigrant restaurants continue to be wildly popular during spasms of the worst anti-immigrant scapegoating. Irreconcilable though it might sound, it’s a correlation that has been well tested. “What came to be known as the Chop Suey Craze began at the height of anti-Chinese sentiment, when fears of the ‘Yellow Peril’ were staples of newspaper scare stories,” writes Freedman of the late 1800s. Today, not much has changed. “It turns out to be eminently feasible to honeymoon in Cancun or eat guacamole while holding intolerant opinions about immigrants from Mexico,” he writes.

The Pope wanted the sculpture unveiled in the tourist hot spot of St. Peter’s Square “so that all will be reminded of the evangelical challenge of hospitality.” The staging took some work, says Schmalz, since the cobblestones had to be prised up and replaced after a base of concrete was poured to support the sculpture’s crushing 3.5 ton weight, for below St. Peter’s yawn the catacombs where early Christians buried their dead — a situational peculiarity that heightens the transience of those on board, while forging a link with a religious group targeted by state violence.

Though it will not be permanently exhibited at St. Peter’s for now, Angels Unawares is moored in the piazza designed by the great Italian sculptor Gian Lorenzo Bernini, who envisioned its elliptical shape as the welcoming “maternal arms of Mother Church.” Acutely aware of the honor, Schmalz chose to sculpt 140 refugees as an homage to the 140 statues crowning Bernini’s sublime colonnade. His ragged assemblage is quite a contrast to the stately parade of Catholic martyrs and virgins. But what makes his sculpture a radical departure from Bernini’s saints (or, for that matter, the Mayflower Puritans) is the creedal diversity it radiates — a testament to Pope Francis’s distinctly modernist mores.

“The idea of the sculpture,” says Schmalz, who fashioned some of his figures on photographs from Ellis Island, “is for people to see those who look like themselves.”

The celebration of la difference attested to by the conspicuous assortment of headgear — cowls, veils, bonnets, Hasidic Jewish hats, hijab, turbans, flat caps, bamboo hats, sombreros — is inspiring. Even if it throws into high relief the paradox that these heterogeneous passengers with their different gods and clashing dietary laws are rooted on that boat only by virtue of their uprootedness. Once they land, assimilate and slip the lasso of foreignness that ravels them, the inexorable force of difference will begin to assert itself.

As history has shown, migrants barely off the boat have turned on other groups of migrants, as demonstrated by the Yellow Peril, whose leading monger, the Irish-born Californian demagogue Denis Kearney, capped every fulmination with “The Chinese must go.” The American public soon tired of his diatribes, but not before he was challenged to a duel by the mordant New York journalist Wong Chin Foo, who gallantly offered him “his choice of chopsticks, Irish potatoes or Krupp guns.”

But on that precarious boat, Chinese bamboo hat and Irish flat cap, hijab and Hasidic hat, are united by a common desperation to survive. The congerie of caps summons the dreaded word with which “cap” shares a lexical stem, “capsize” — “to sink by the head.” With pitch-black timing, even as the unveiling was underway, news broke that a boat carrying refugees had sunk off Morocco.

In the midst of such jeopardy, the modest bag of food stands out as a memento vivere, a spiritual and secular talisman of nourishment and hope.

Nina Martyris is a journalist based in Knoxville, Tenn.

Claws out as clause causes rift for Buttrose family

Meet the Aussie artists vying for the 2020 countdown