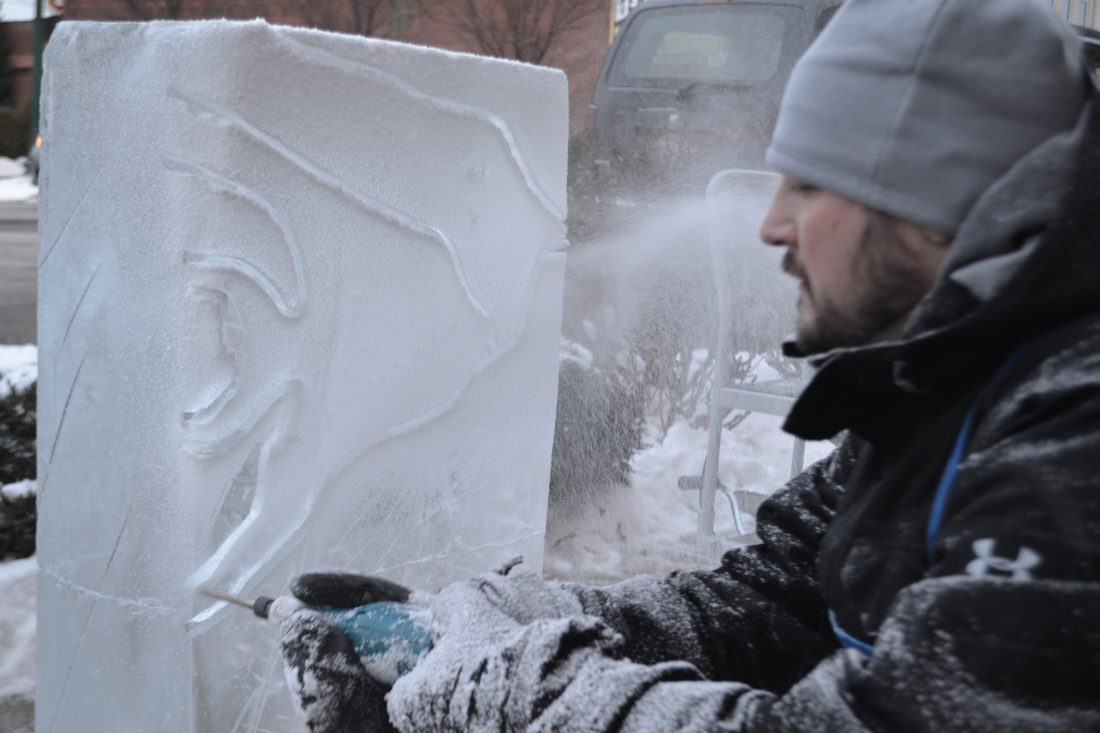 Times file photo
Tyson Whistler works on an ice sculpture during the Fire and Ice First Fridays event in January 2018. This year, Marietta Main Street postponed First Fridays because of weather and reconfigured it as the Marietta Ice Festival, scheduled for Jan. 18.

Sixty-degree weather at the beginning of January is inviting for walking around but not conducive to long life for ice sculptures.

Marietta Main Street took a look at the weather forecast for its First Fridays Fire and Ice event, scheduled for Jan. 3, and decided the time was just not right. They initially reschedule it for a week later but temperatures were once again unseasonably warm.

The event was to feature 17 ice sculptures by chef Tyson Whistler. Those works are now on ice, so to speak, awaiting the replacement event: The Marietta Ice Festival, scheduled for the afternoon and early evening of Jan. 18.

“It essentially takes the ice component of Fire and Ice and reschedules it,” Marietta Main Street interim director Cristie Thomas said Friday. “It’s an idea we had a while ago.”

Thomas said the organization means to make the ice festival an annual event rather than renewing it as a First Fridays theme.

“We’re likely to keep this around. In all, we’ve got 17 sculptures, we’ve got live ice carving. We asked the businesses to stay open until 7 p.m., the United Way Alliance will be at The Armory, there will be things for the kiddos to do, ice painting and s’mores, and Main Street will have a booth at The Armory, serving hot chocolate provided by Jeremiah’s.”

The Fire and Ice theme for First Fridays had had a successful run for two years.

“For the first two years, it was quite frigid. The first year, the sculptures lasted all weekend. You could still them on Sunday,” Thomas said.

This year, the temperatures on Jan. 3 were nearly spring-like.

“The sculptures are a huge component of this, and in weather like that they wouldn’t last more than an hour,” she said.

The organization has its fingers crossed for cold on Jan. 18.

“It looks pretty promising, and that’s the date we’re going with, rain or shine. If it’s 70 degrees, we just ask folks to get out there at 3 p.m. if they want to see the sculptures,” she said.

It will be worth the effort.

“They’re set up along a nice walking path through downtown,” she said.

“The folks who sponsor the sculptures, that’s where the sculptures go. They request the design, and they decorate it however they like,” she said. Businesses often like to have images of their logos – for example, Marietta Dental sponsored one that will be on display at The Armory.

“It’s based on their logo, it looks like a giant molar made of gears,” Thomas said.

Whistler said Friday he’s been working on the ice sculptures since October, with 13 done and four to go, not including the piece he’ll be carving live at The Armory.

“I’ve got a small freezer at home that will hold some of them, and the Lafayette Hotel has been kind enough to let me use their walk-in freezer, and that’s where the rest of them are,” he said.

Although the need to cancel the Fire and Ice event was unfortunate, he said, the Ice Festival has exciting potential.

“Having it on a Saturday opens it up to more activities, more things for people to interact with,” he said. Additionally, opening the event in mid-afternoon instead of the evening offers new possibilities.

“We’ll get that transition from sunset we haven’t had before,” he said. “The natural light is cool, and then we’ll turn on the lighting when it’s dark for a completely different look.”

Whistler said he’s excited every year about producing new works, and each year demand for them grows.

“The octopus I did this year, I think it might be the best thing I’ve ever done,” he said.

Michael Kelly can be reached at mkelly@mariettatimes.com

Ivan Meštrović’s Sculpture Sold at a Christie’s for Over 300,000 Euros