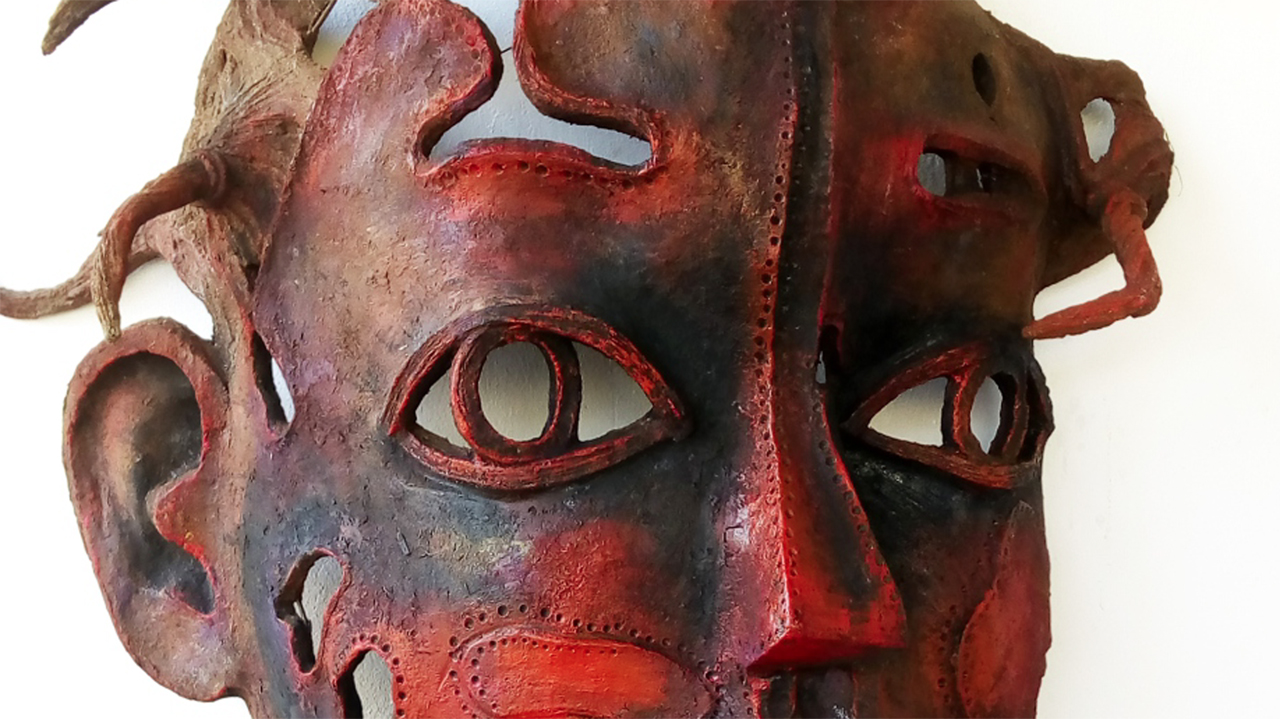 Against the backdrop of increasing socio-economic challenges, Philip Nzekwe takes a sculptural probe into people’s behavioural patterns. He applies, mostly youth subjects, African contents and man’s relationship with his pet to build his visual narrative.

Specifically, his works projects into the widening scope of freedom, which the 21st century has provided humanity.

In 2017, Nzekwe and Gab Awusa featured in a two-artists show titled, Different Strokes, at the Terra Kulture, Victoria Island, Lagos, where they exposed the beautiful side of their immediate environments. Two years after, Nzekwe returned to the Lagos exhibition circuit, arming himself with a new sobriquet: Citizen of the world.

“I use my art to highlight issues as they affect my daily life as an African and a global citizen,” the artist said during the exhibition. “I believe art is life, and as such, should reflect our everyday realities in its entirety, the ideas, and ideals of freedom; for life in the 21st century is about freedom of expression.”

On display at the show are sculptural pieces, mostly relief, which derives their textures from discarded materials such as wood, wood dust, cement powder, and paints. Few of the works in paintings also re-enact the artist’s pet themes, specifically, dogs, which are human beings’ best friends.

In series like Windows of the Soul, semi-expressionless portraits, lifted off their bases, perhaps, draw something in common between the language of the face and the inner mind. In bronze, the youthful faces of the subjects, textured in roughened layers, also explain so much about innocence and the souls.

The artist’s probe into the inner working of man continues in Curious Mind, a sculpture of wood fiber with a subtle smile that suggests an attempt to leap into the future. Again, the energy of being youthful radiates in the bust, exuding painterly texture. In series of four, Curious Minds come in as many diverse textures of relief as possible, in satiating art appreciation thirst.

Of note and interest in all the female depictions by Nzekwe, is the native contents and identity, specifically, of the head dressings. The natural hairdo — plaiting or weaving — adds to the aesthetic features of each bust.

Apart from creating sculpture for whatever thematic or aesthetic statements, Nzekwe also brings hilarious contents into his art. Mostly using the head of dogs in exaggerated stylised forms, the artist drags interesting conversations into the themes. For example, in Hustler, made of reinforced stone, the artist brings pop culture and male fashion of face cap to depict desperation. Strengthening the hilarious contents is the planting of cigarette in the mouth of the doggy face.

From similar pieces such as Nigga, Idiot, Police Dog to Boxer series and Retired But Not Tired, Nzekwe’s sense of humour in sculptural expressions asserts his creative depth in visual culture.

Nzekwe built his art on the pedestal of freedom of expression, noting that his works represent how he detests “any form of material limitation.” In fact, he argued, “Eclecticism, is the soul of artistic freedom.”

In the contemporary age of artistic identity challenge when some artists of African descents are stranded on the global scale, Nzekwe proudly sticks to his root. “My art forms are inspired by traditional African art and architecture, organic forms and tropical colours from nature and contemporary 3D animated images.”

His artistic mission includes investigating what he described as “complex human behavioral patterns emanating from the need to express identities within their world.”

Specifically, he cited dogs and children as “case studies for my intuitive subjects,” and explained how they “are presented from the raw state of my mind.”

Based in Lagos and Asaba, Nzekwe was trained as an artist at the Delta State University (2002) and University of Benin (2007) where he obtained Bachelor’s and Master’s degrees in Fine Art. Nzekwe tracked his eight years of postgraduate training to the studios of masters such as Demas Nwoko, Bruce Onobrakpeya, Sam Ovraiti, among others.

His technique, he stated, was “inspired by traditional African art and architecture, tropical colours and contemporary 3D animated images.”

This much he disclosed, has been used in his art “to investigate complex human behavioral patterns within the societal context as a student of nature.”

He listed several artists’ workshops such as, Harmattan and Triangle Trust, among some of the resource events that shaped his post-training career.

Curated by Ngozi Okwedi, Raw Intuition, according to her, exposes Nzekwe as an artist whose work is a blend of “imagination and storytelling.”

She explained how her collaboration with the artist “enabled the exploration of an array of different mediums and materials.”

Excerpts from Okwedi’s curatorial note “This exhibition features two series: Lazy Dog and Curious Mind. Dogs at play and work mirrors the human society and portray how individuals respond to change within their environment.

The dog, since the dawn of civilisation, earned the moniker, “man’s best friend.” Lazy Dog series feature dogs in various settings and their interactions with humans.

“The African child is on the receiving side of deprivation. As incurable optimists, parents and the larger society bottle up their emotions amid this pervasive deprivation. Consoled by religion and beliefs centred around fate, most wear a plastic smile. Curious Mind series encourage exploration beyond surface appearances and the discovery of real potentials.

“With your Curious Minds, walk by the Lazy Dogs. You should enjoy the massive creativity on display at this exhibition. Take a cherished moment home by keeping a worthy piece of a sculpture.”

Warm for the human form, from Rodin’s bronzes to stone slabs

Prayers for peace made during annual candle lighting – News – fosters.com

Why has the city remained silent on Yazzie sculpture? – Boulder...

Sculptor Guide - November 24, 2019
0
Thanks for subscribing! Please check your email for further instructions.