Below left we have a photograph* of Michelangelo’s “David” sculpture, which is on view at the Galleria dell’Accademia in Florence, Italy. Below right we have a detail of a David copy which we saw in Minneapolis not too long ago. Do you see the difference in facial expressions? Michelangelo’s David has a furrowed brow, with a look of concern on his face. According to the Wikipedia page on this sculpture, it’s because Michelangelo portrayed him at the moment before his battle with Goliath, at which point he is tense with anticipation and getting ready for battle. However, in the David copy from Minneapolis, he looks pretty darn mad, and I’ll tell you why … scroll down for more. 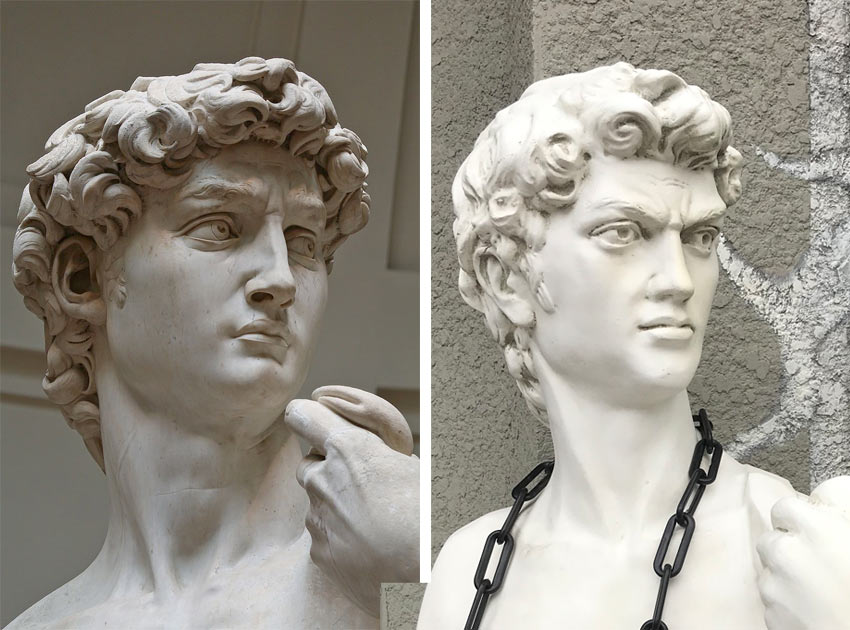 Here’s the reason why I think this David copy has an angry expression on his face … he’s been put to work outside of an antiques store in southwest Minneapolis on 50th Street. And … he has to endure the embarrassment of standing outside with an “Open” sign around his neck … although it is strategically placed to give him a little bit of personal privacy, unlike the David in Florence.

History According to the Comic Book

Tear the Map – Artist Insights from Ryan Kohler, an Artist on Maine Art...

Listening to the Joy in James Baldwin’s Record Collection

Sculptor Guide - December 18, 2020
0
Thanks for subscribing! Please check your email for further instructions.