A talented baker would surely win first place in the Great British Bark Off after she made an almost life-size sculpture of her pet beagle – out of cake.

Anna Dillon, 51, of Cambuslang, South Lanarkshire, has turned her hand to celebrity caricatures including actor Sylvester Stallone, and Queen frontman Freddie Mercury, and makes the portraits out of Victoria sponge or Madeira cake.

The mother-of-one, who has been making themed cakes for nearly six years, competes in baking shows around the UK as a hobby.

She was inspired to make a cake model of her puppy, Poppy, aged eight months, showing the beagle with her ears flying as she leapt through the air.

The one-and-a-half foot cake took her four days to make. The metal wire used to structure it took three days to construct, while another day was needed for decorating. 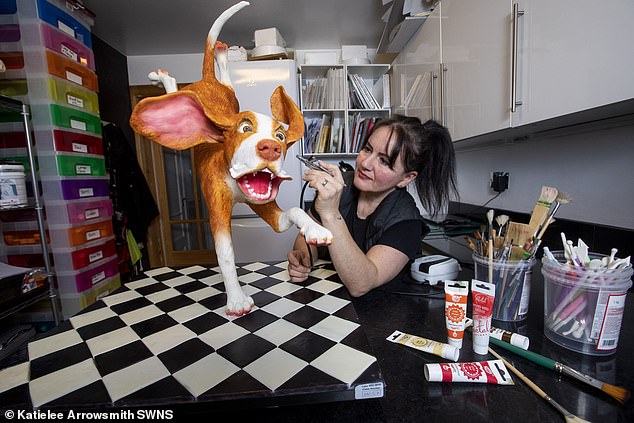 Anna Dillon, 51, from Cambuslang, South Lanarkshire, makes real-life sculptures made of cake. Her latest creation is a model of her puppy 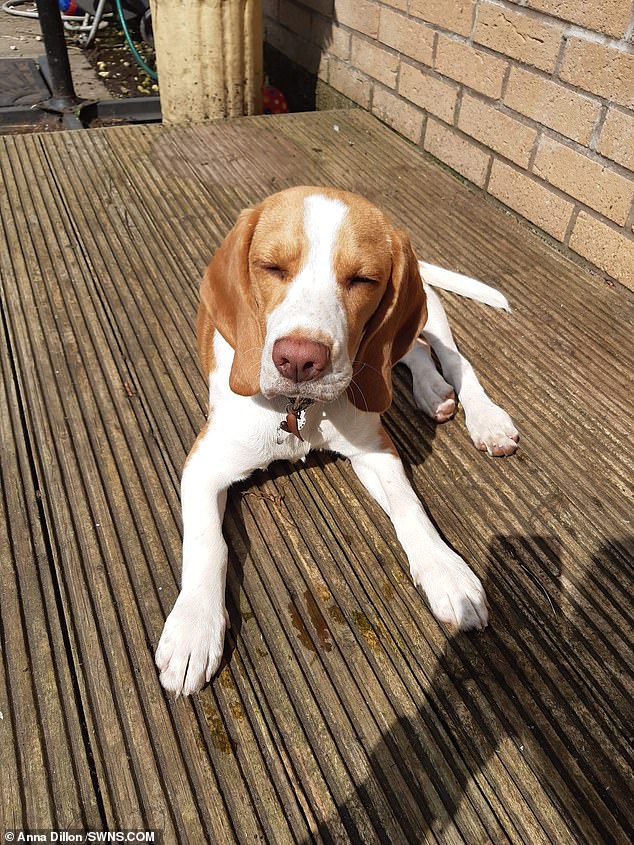 Anna said: ‘Poppy didn’t take me that long, it was mostly just the structure, but when I get to the finer details I race through. The decorating took about a day.

‘I used a ten millimetre threaded rod, with bolts underneath and a couple through her paws so you can’t see it.

‘It’s about one-and-a-half feet tall. I was wondering if it would be strong enough but it worked fantastically.’ 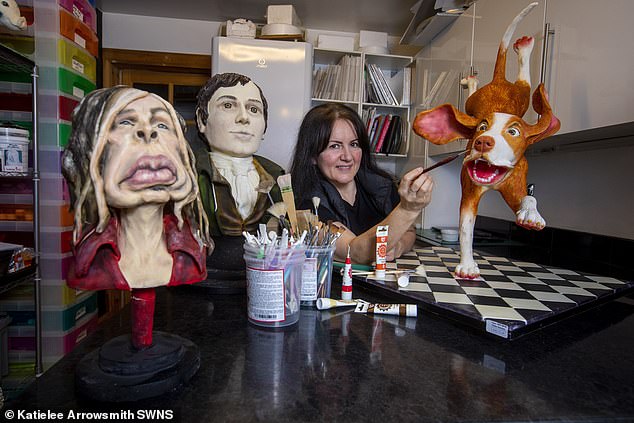 Anna at home with some of her creations, like the puppy cake and busts of Steven Tyler and Rabbie Burns 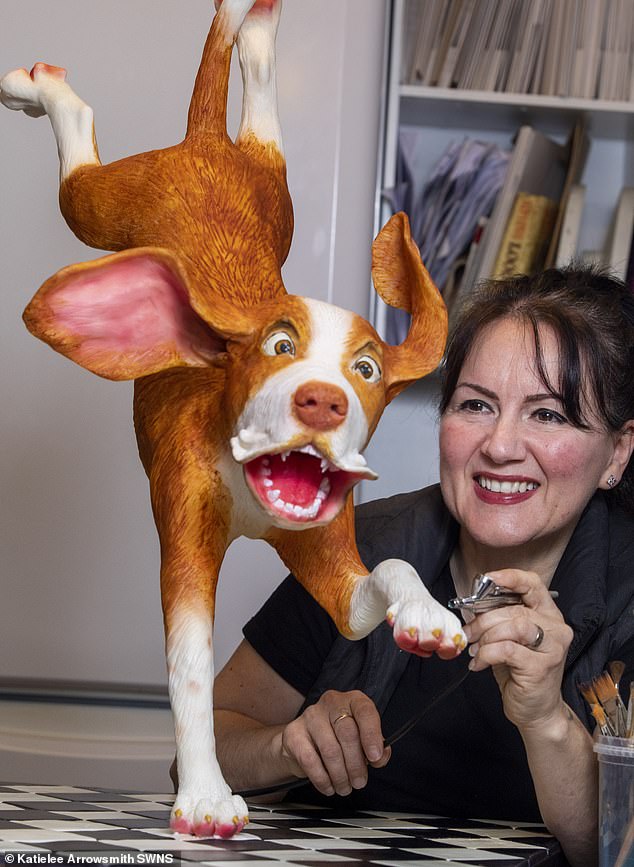 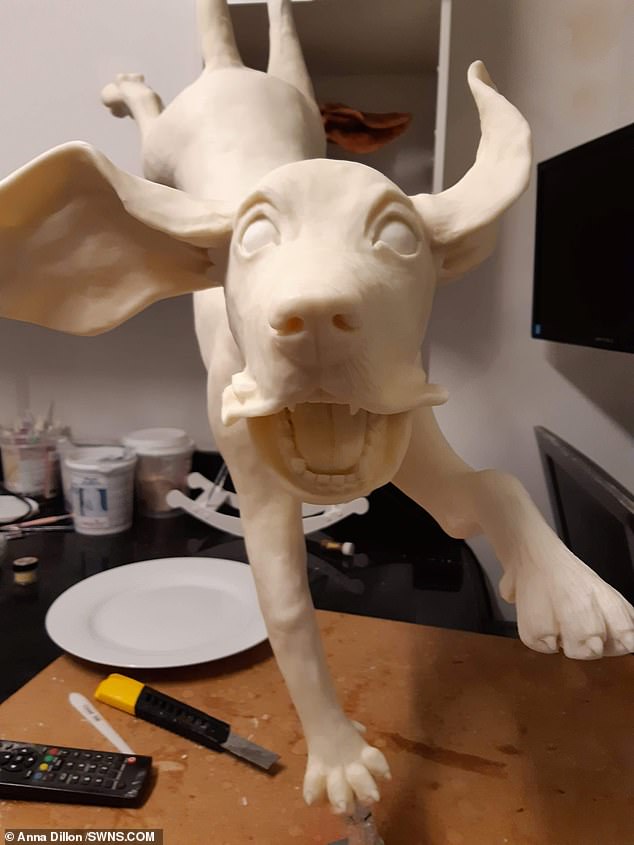 A picture of the model of Poppy before Anna painted it. You can see the details of the nails, mouth and teeth 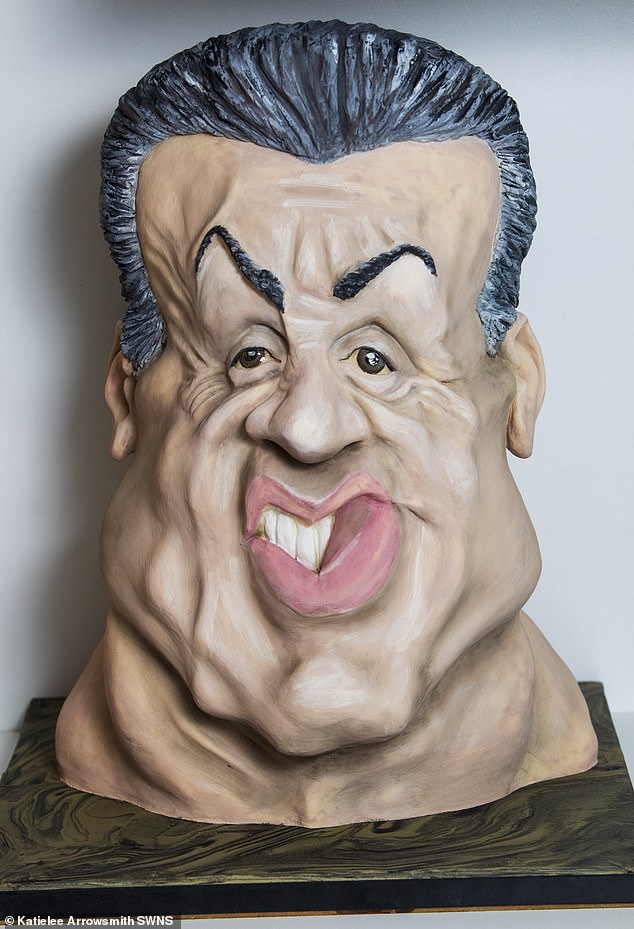 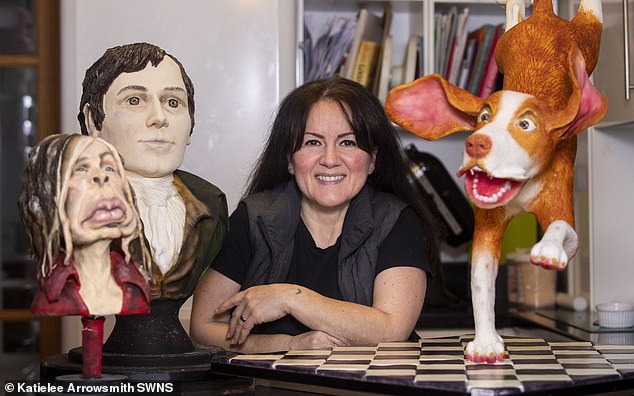 The mother-of-one boasts an impressive collection of life-like cakes, including one of Aerosmith’s front man Steven Tyler, Rabbie Burns and Poppy 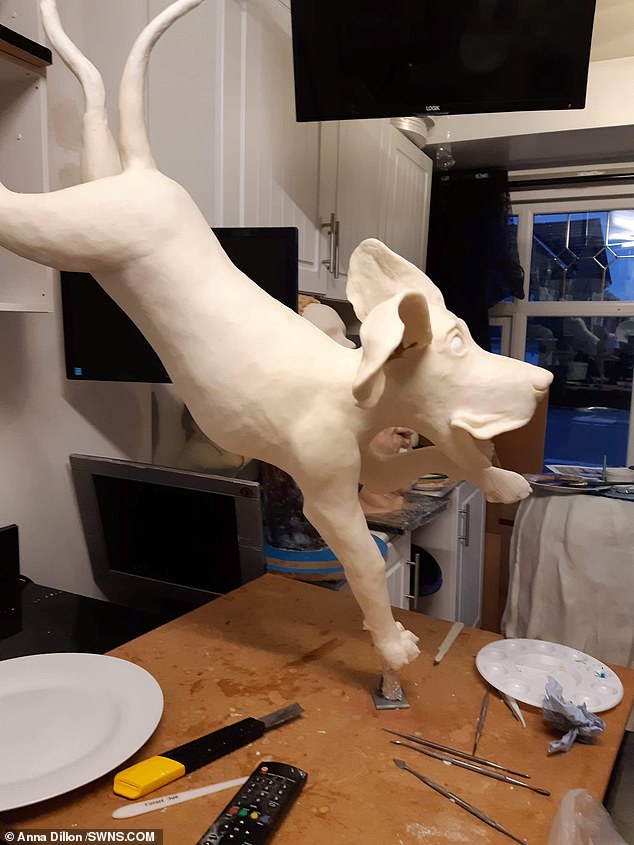 It took Anna four days to complete her sculpture of Poppy, though she explained making the cake itself wasn’t long 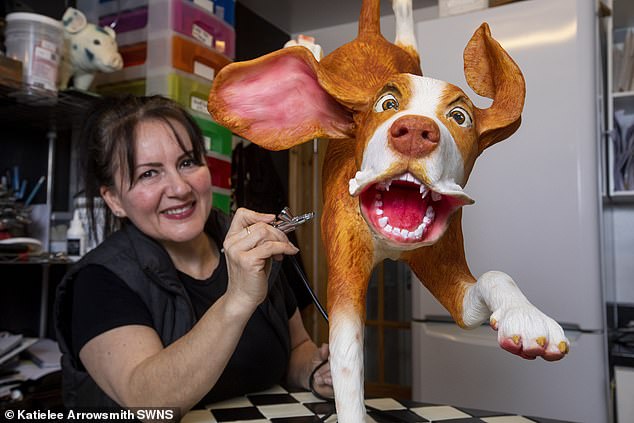 Adding the finishing touches. It took Anna three days to create the metal structure holding the cake together 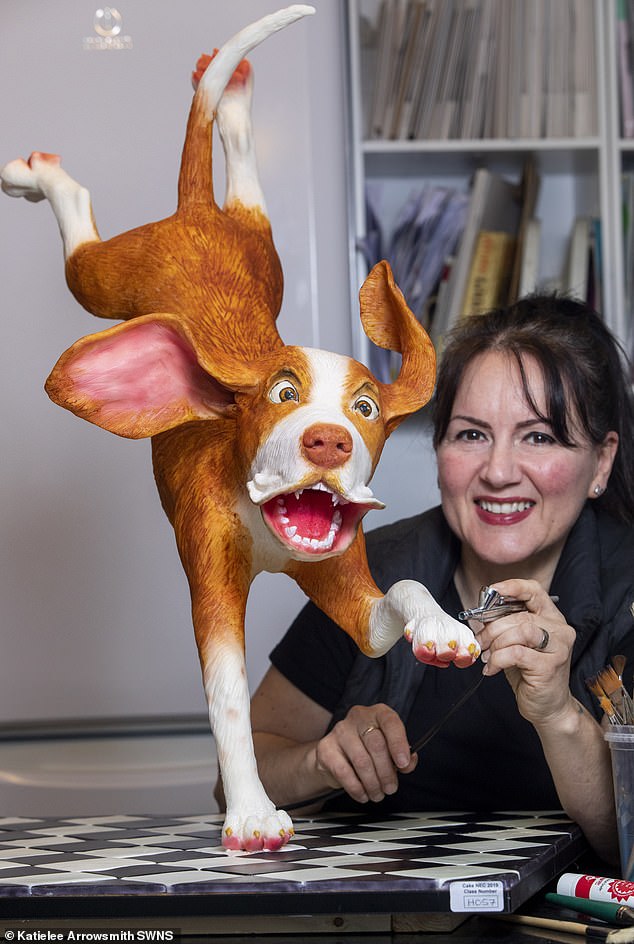 Other famous faces who have captured her imagination for sculpted cakes include poet Robbie Burns and Angelina Jolie’s character Maleficent from the 2014 film.

The first she created was a commission, for a birthday cake in the shape of Captain America’s face, in 2013.

She said: ‘My first shaped cake was Captain America with his face and a shield in the background. Then it all took off from there.’ 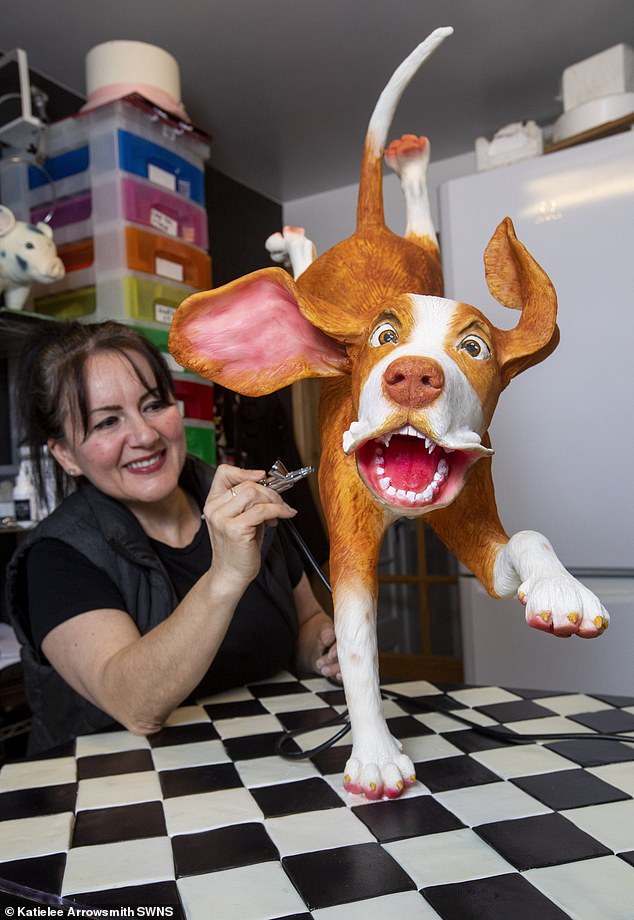 Anna took a day to decorate the impressive sculpture. She used a mix of edible and unedible ingredients to put it together 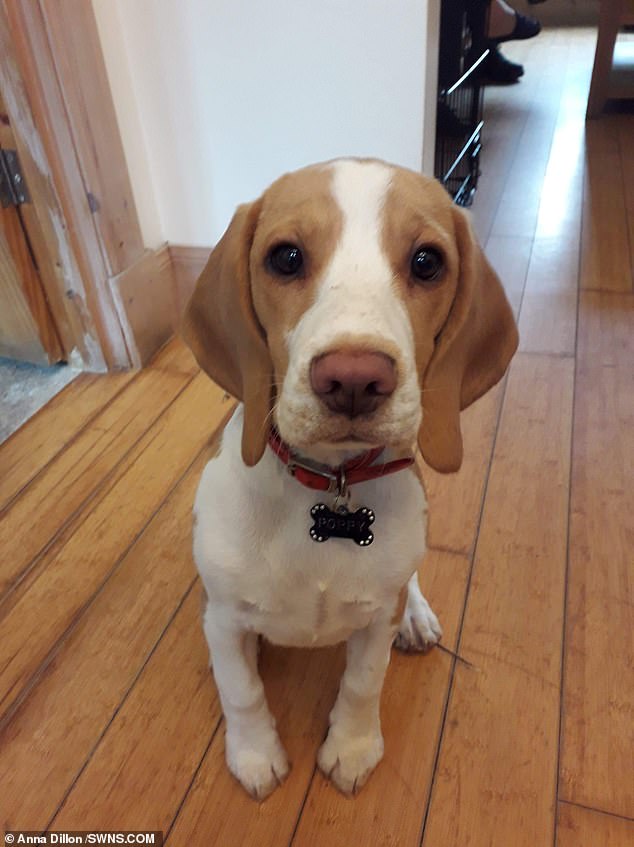 Poppy, pictured, was the inspiration behind the cake. Anna’s family is very supportive of her hobby 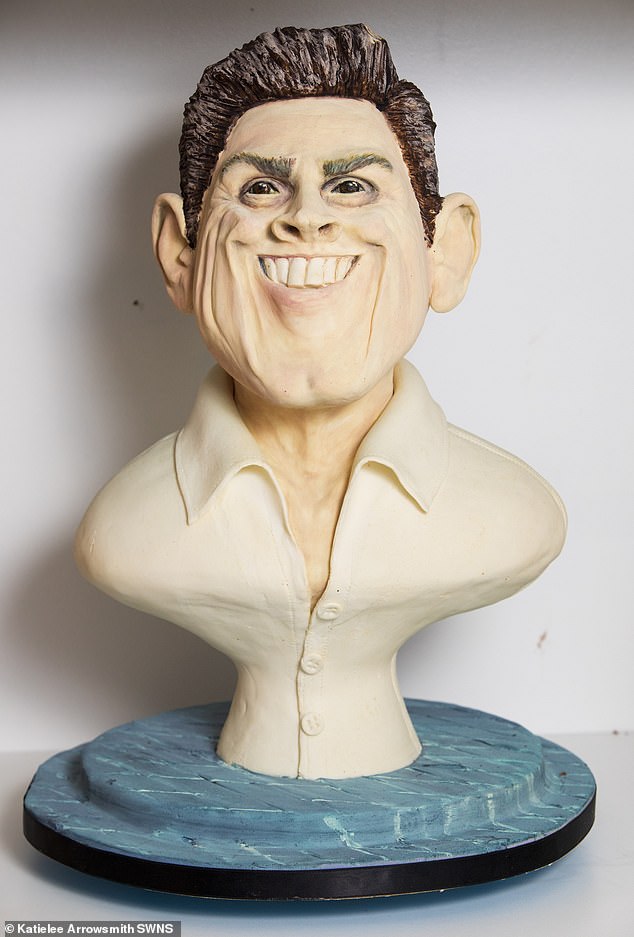 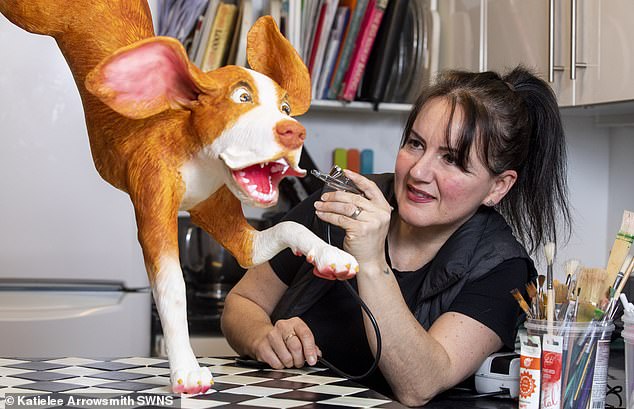 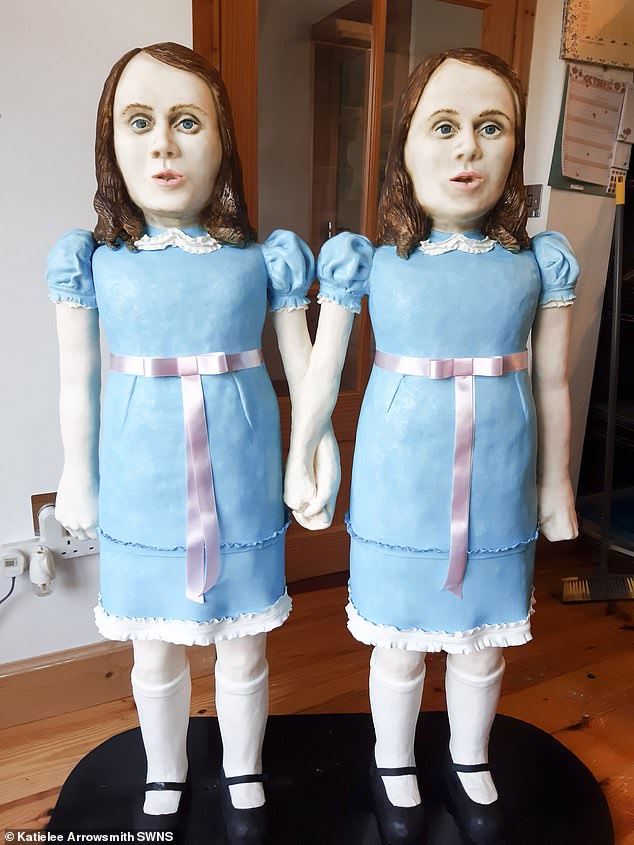 Taking inspiration from Stanley Kubrick’s The Shining, Anna created this spooky cake of the terrifying twins 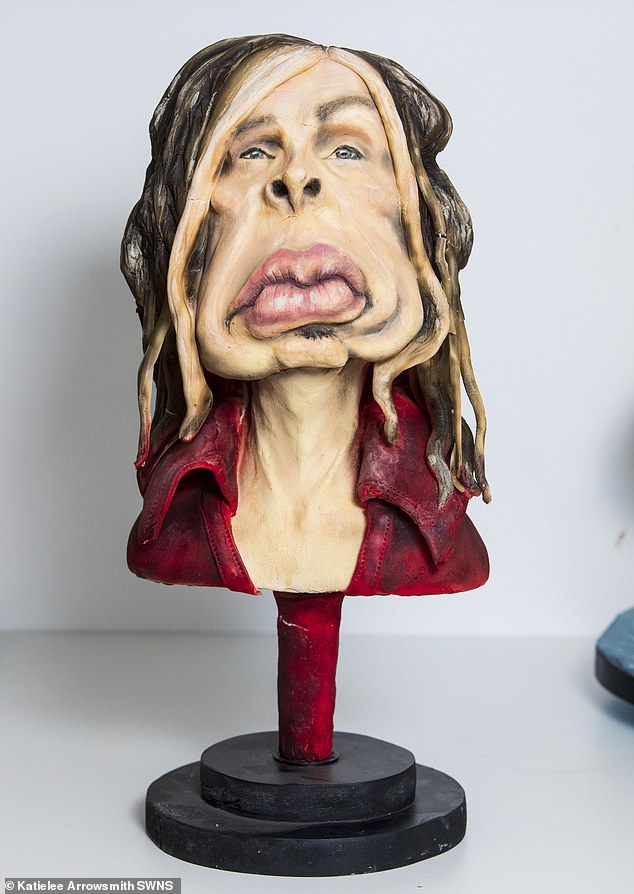 Anna, whose first cake was a model of Captain America, back in 2013, makes countless sculptures of celebrities, like this one of Steven Tyler

Realising she had a knack for caricature and shaped cakes, in 2015 she entered her creations into the inaugural Cake and Bake Show in Edinburgh. After wowing judges, she came second in the amateur section, which had a theme of fairy tales and children’s characters.

Mrs Dillon, a care worker, said: ‘I made a model cake of Angelina Jolie as Maleficent. The judges were zooming in with their phones and taking pictures.

‘When you go to competitions your heart always sinks because you don’t think yours is good enough. But it was really good.’

She converted her garage into a studio for baking. 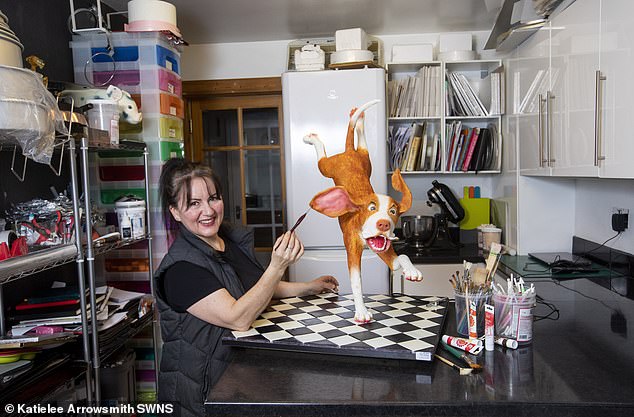 Anna with her Poppy cake. After six years of making sculptures out of cake, the mother of one has mastered the art 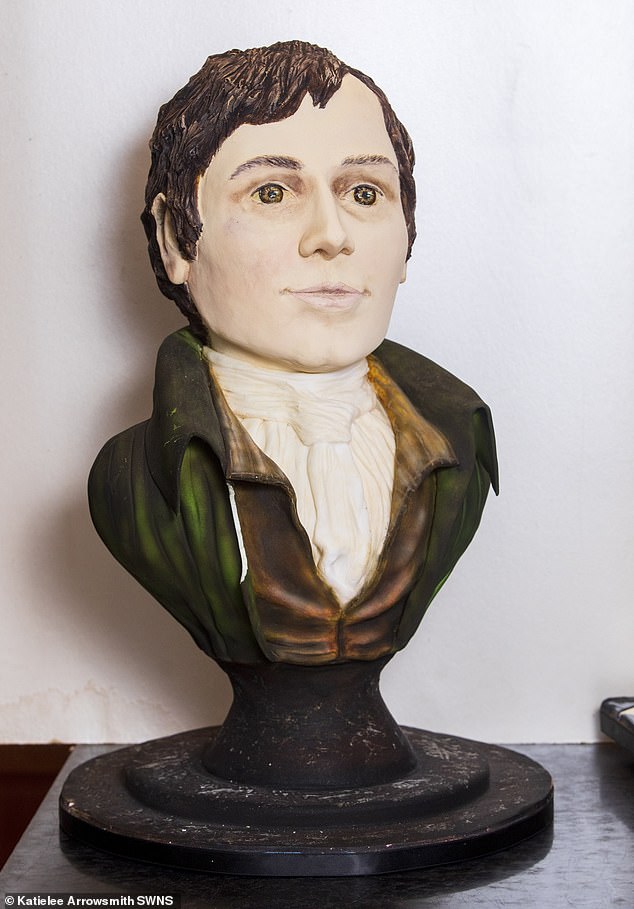 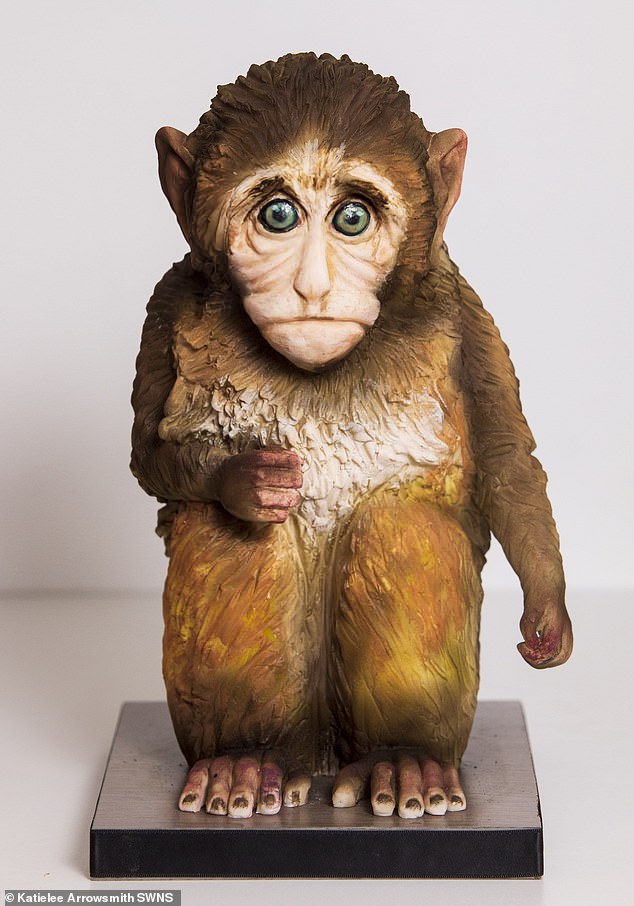 In addition to makes cake models of celebrities, Anna tried her hand at animal-themed cakes, like this monkey cake

Her husband Kenny, 50, and daughter Stephanie Burns, 28, have been very supportive.

She added: ‘My family’s only just coming round to it. I don’t let my husband help, he’s terrible with art, but he’s very supportive and drives me down to the cake shows. He’s very proud of what I do and so is my daughter.

‘I do this all part-time and I’m self taught. I love it because it’s art, I’m quite an arty person. I combined the cake making and art together and that’s why I get these structures.

‘Once I start I can’t stop. I love what I do and I just keep it as a hobby. I’ve just learned how to use each and every medium that I have used.

‘I would say it just takes time and patience to work out how you can use these mediums, and that’s what I’ve done to get the results I’ve got today.’ 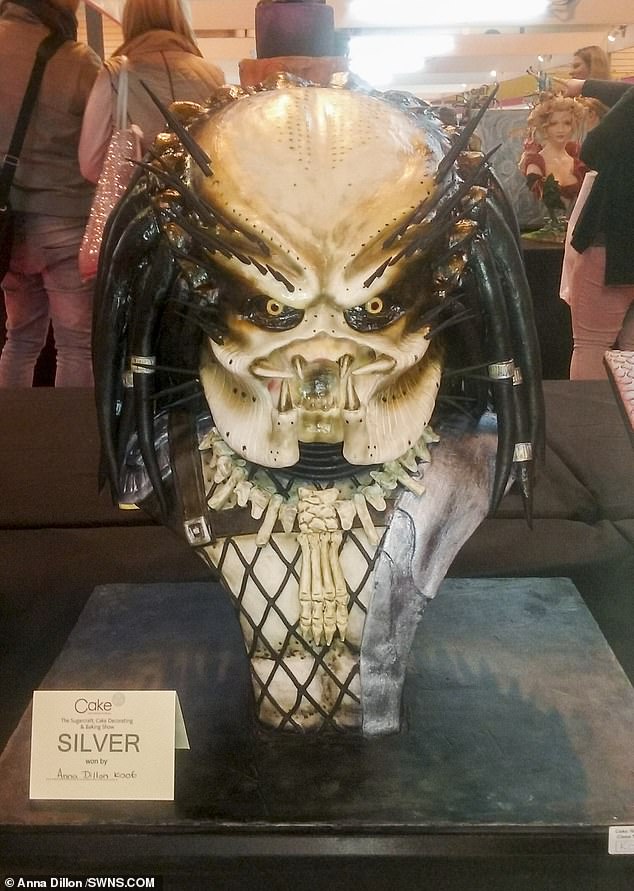 The Scottish mother entered competitions for her model cakes, including this Predator cake which earned her a silver medal 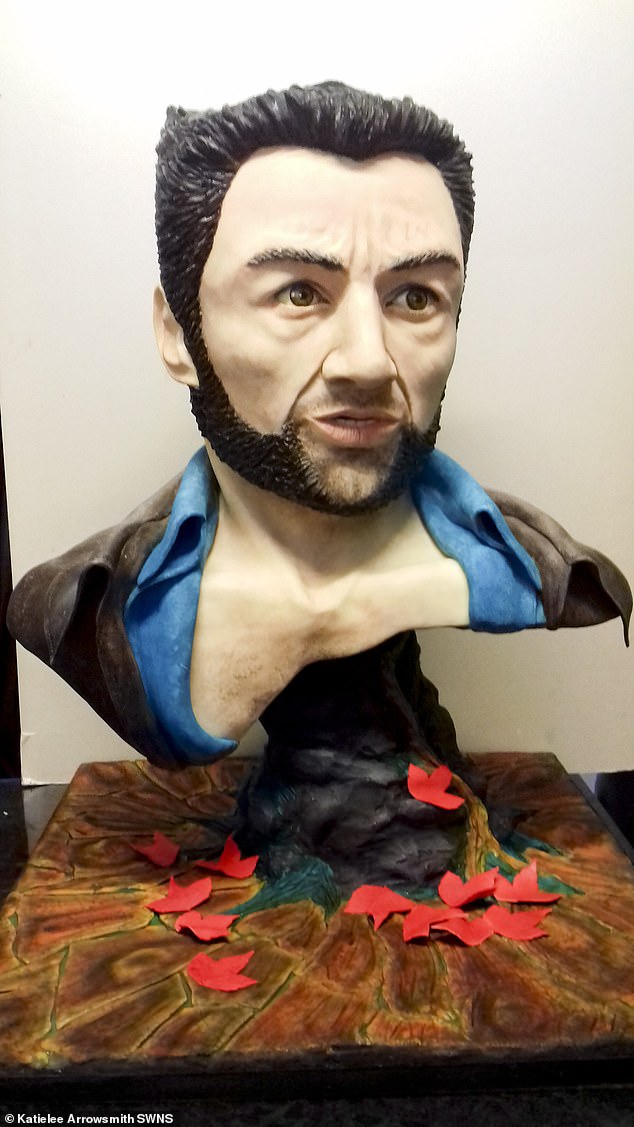 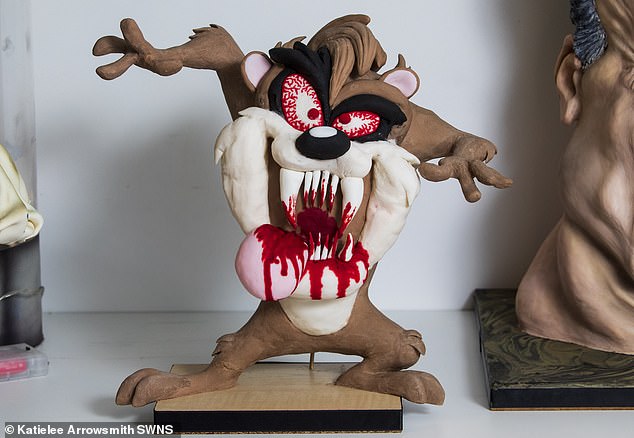 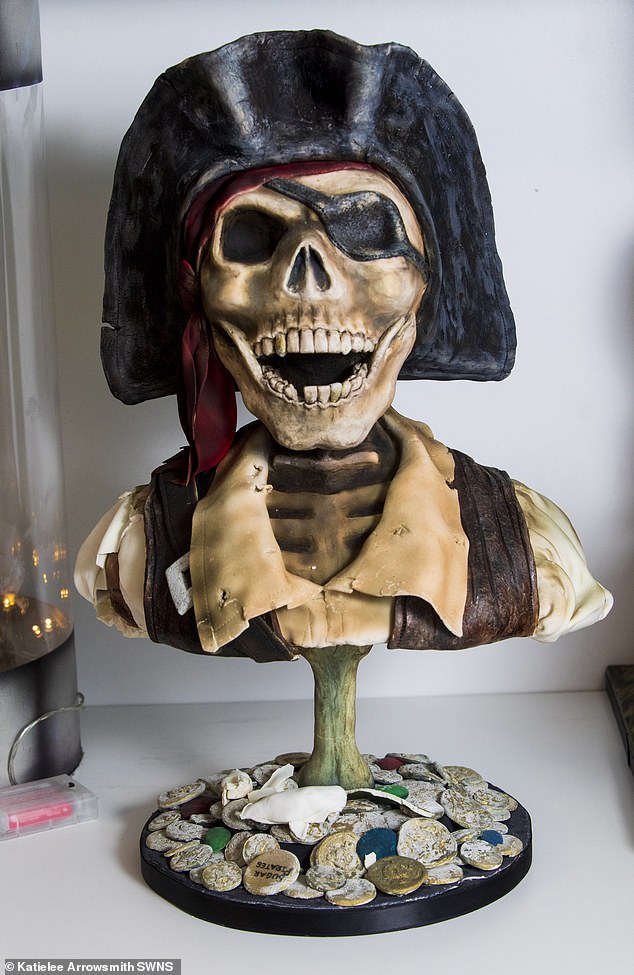 The mother-of-one created an impressive bust inspired by the Pirates of Caribbeans movie, representing a pirate skeleton 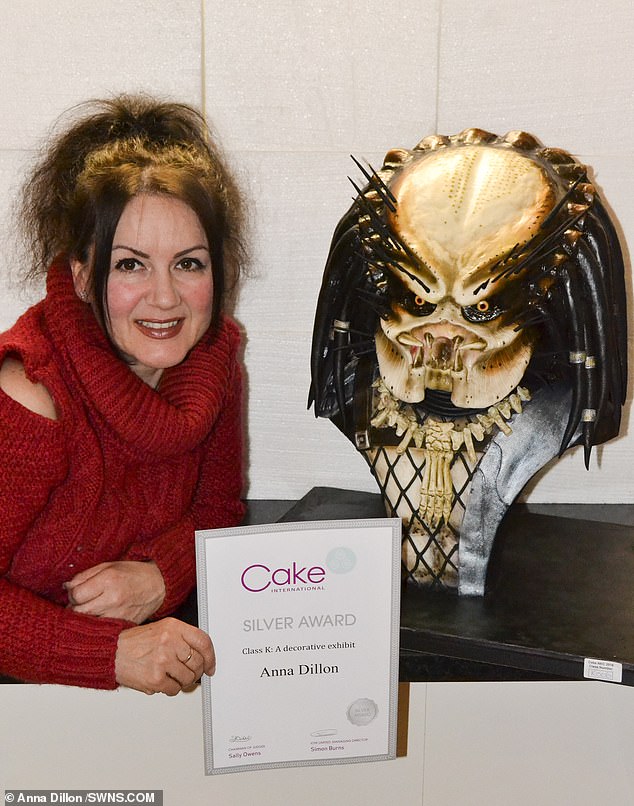 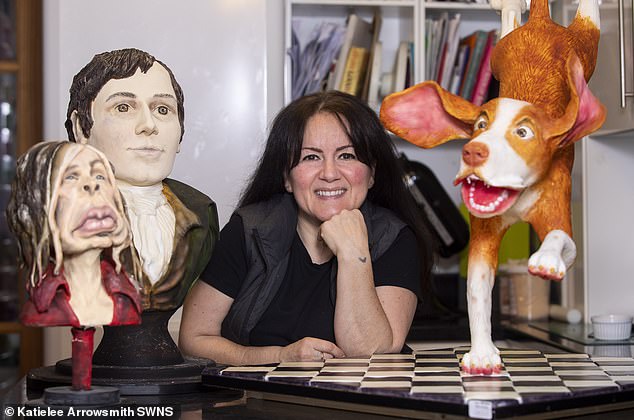 Anna said her husband is hopeless at decorating cakes, but will gladly help her how he can by driving her to the cake shop 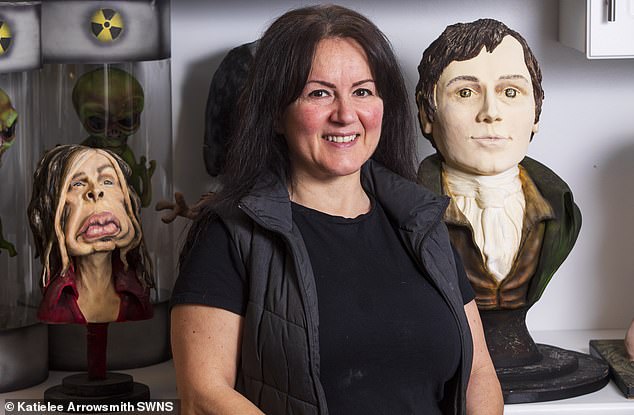 Hetty and Ness and their voyage of discovery

How Amanda Gorman’s Poetry Roused a “Country That Is Bruised but...

A Slippery Drama About the Uncertainty of Memory

Sculptor Guide - January 1, 2020
0
Thanks for subscribing! Please check your email for further instructions.