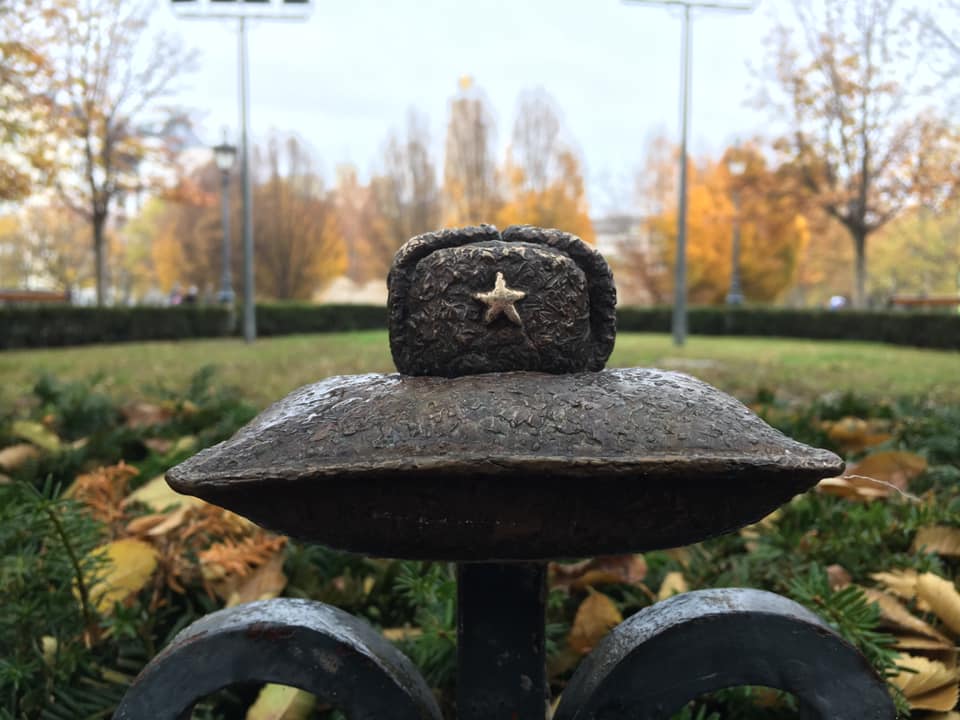 Last week, yet another miniature statue appeared in Budapest. Guerrilla-sculptor Mihály Kolodko placed his new art-piece, a small ushanka (winter hat) with a red star on it, hidden in Liberty Square, on a symmetrical line opposite the monument for Soviet soldiers. However, the sculpture has stirred controversy, and on Monday, politician and MP of national radical party Mi Hazánk (Our Homeland), Erik Fülöp, knocked the statuette off the fence with an axe and threw it into the Danube.

Mihály Kolodko placed the newest addition to his miniature works of arts in Liberty Square at the end of last week. Many people visited the place after he had posted a video and photos of the statuette on his social media sites. However, on Monday, Mi Hazánk MP Erik Fülöp arrived to the square and knocked the little ushanka off, then threw it into the Danube.

According to a statement from the party: “on the Memorial Day for the Victims of Communism, when remembering Hungarian political prisoners  and people brought to the Soviet Union for forced labor, MP Erik Fülöp removed the unauthorized statue of an ushanka and put it in a place worthy of it.”

Hungarian television channel ATV has contacted the sculptor who said, he “thought the statue would trigger violent reactions” but didn’t expect that someone would knock it off. He added that he was “not sad, because the essence of the artwork is to evoke emotion, and in this case it happened. The statue was created, its life ended soon after, but that’s fine.”

The 14-meter-high white Soviet heroic monument was erected on Liberty Square in 1946 and still stirs controversy with its presence in the capital as for many, it symbolizes the oppressive Soviet Union and communism. It was damaged several times over the last decades, most recently in late October, when Russian President Vladimir Putin visited Hungary.

Kolodko, who was born in Ukraine during the communist era, said that when he first came to Budapest in 2016, he was surprised by the sight of the monument and thought that it would be dismantled soon. He said he had thoughts about the monument and the still present Russian influence that he wanted to show with his guerrilla sculpture, however, not in a direct way, as he thinks art needs to give a kick start to the audience’s fantasy and awaken their thoughts.

“I want to communicate with the people of Budapest, not with words, but with my sculptures”: Interview with Guerilla-Sculptor Mihály Kolodko

Kolodko added that he is sad that the meaning of the statue was misunderstood. He only wanted to suggest that although the last Russian soldier had left Hungary a long time ago (in 1991), Russian influence is still present in the country.

Kolodko’s plan is to make another miniature statue on the right side of Liberty Square, where he would put a helmet for an American football player on a cushion as a symbol of the presence of American influence in Hungary.

The Story of the Scorched Melania Trump Sculpture in Slovenia

Sculptor Guide - October 23, 2019
0
Thanks for subscribing! Please check your email for further instructions.