Robert Indiana’s “LOVE” sculpture has been one of Scottsdale’s prime selfie spots since 1999, well before the word “selfie” was coined.

The universal appeal (especially for wedding photos) is understandable, but “LOVE” is just one of many photogenic sculptures throughout this artsy, upscale suburb of Phoenix.

Since 1986, Scottsdale has reserved 1% of all capital project funds for art in public spaces, and since then its collection has expanded rapidly, with about 100 permanent installations.

“Horses are always a huge draw,” says Wendy Raisanen, curator of collections and exhibitions for Scottsdale Public Art, part of an independent nonprofit funded by the city.

“We’ve really tried to have a balance between the Western feel and more modern, cutting-edge pieces.”

That says a lot about Scottsdale, which once styled itself “the West’s most Western town,” a claim that the town of Cave Creek begged to differ with.

In Phoenix, many of the 200 permanent art projects are integrated into utilitarian infrastructure. Scottsdale has that kind of art, too, but it leans more toward the big and splashy.

TAKE A LOOK: Where to see the best public art in Phoenix

You can find them at libraries, parks and public facilities such as the Scottsdale Airpark. But to get the most photo ops into one walking tour, the hot spots are the Scottsdale Arts District (of course), the Scottsdale Waterfront (home to the annual Canal Convergence) and Scottsdale Civic Center Plaza (home to “LOVE” and 1973’s “Windows to the West,” one of the oldest pieces in the collection).

Details on all 100 works can be found on Scottsdale Public Art’s website. Here’s a sampling that includes the big social-media stars as well as a couple of hidden gems. 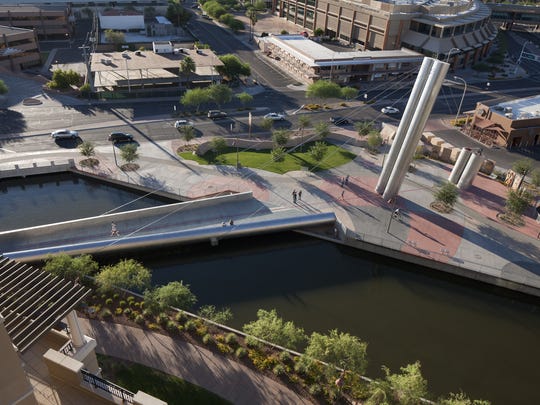 An aerial view of the Soleri Bridge over the Arizona Canal at the Waterfront in Scottsdale in 2011. (Photo: Valley Forward Association)

Soleri, the late Italian architect, apprenticed with Frank Lloyd Wright in the 1940s and moved to Scottsdale in 1956. He founded the experimental community Arcosanti to explore his ideas for eco-friendly design and urban planning, which he dubbed  “arcology.” He died in 2013, but not before finishing this project on the Arizona Canal, which he started designing in 1990. The gleaming metal columns are designed to mark the solstices.

‘The Path Most Traveled’

Where: Pima Freeway (Loop 101) between Scottsdale Road and Shea Boulevard. 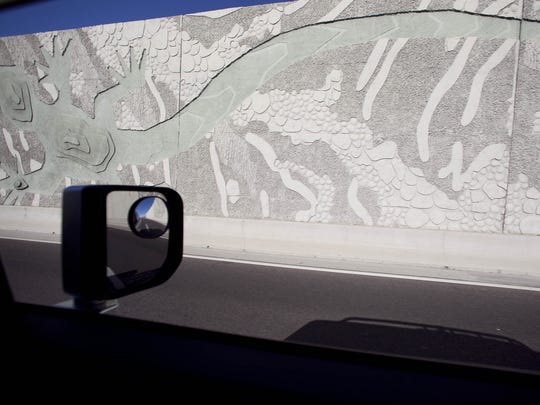 A section of “The Path Most Traveled” artwork along Loop 101 in Scottsdale. (Photo: The Republic)

Lizard, prickly pear and agave designs in Southwestern pastels decorate barrier walls. These textured murals, with lizards up to 67 feet long, are probably the splashiest example of freeway art in the Valley — at least after the demise of the so-called “Squaw Peak Pots” (for the freeway since renamed Piestewa). 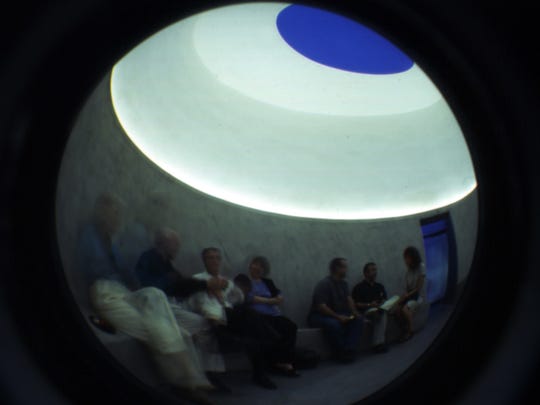 “KNIGHT RISE”: 7380 E. Second St. (Scottsdale Civic Center Mall) | 480-874-4666 | Surrender to the magnificence that is a hole in the wall dubbed “Knight Rise” at the Scottsdale Museum of Contemporary Art. The permanent “skyspace” was created by acclaimed artist James Turrell. View at sunset on a Thursday evening, when SMoCA is open late and it’s free. (Photo: Casey McKee/Special for The Republic)

California artist Turrell is famous for his mammoth work-in-progress at Roden Crater near Flagstaff, and for his Skyspaces, cozy architectural designs with openings made to create shifting designs in sunlight and shadow. This one is integrated into the museum, designed by Will Bruder.

‘The Doors’ and ‘Sound Passage’

Where: Southwest corner of Scottsdale and Camelback roads. 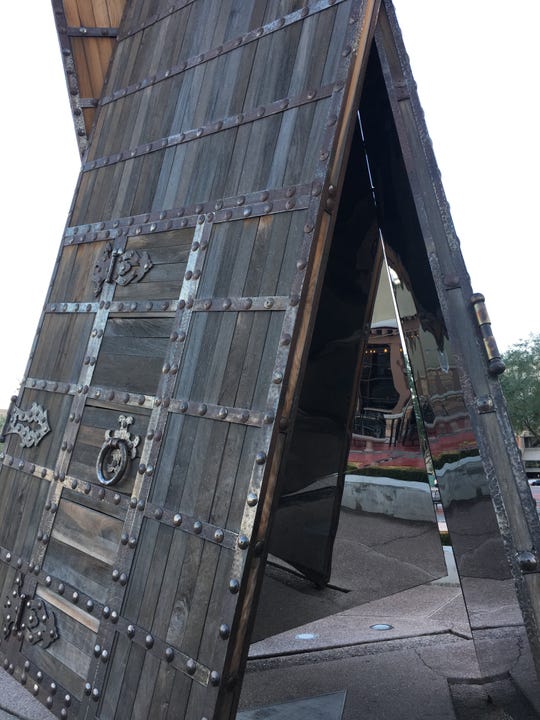 Where: At the entrance to WestWorld of Scottsdale, 16601 N. Pima Road. 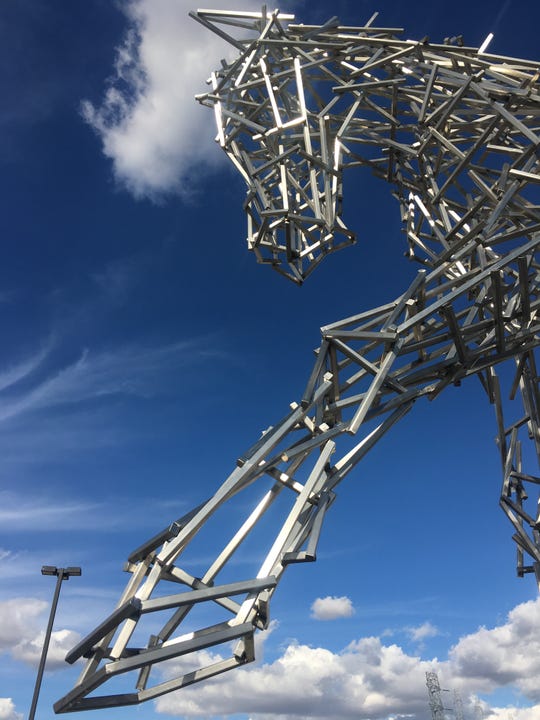 Stainless steel tubes give a shimmering sense of motion to the giant horse sculpture erected at the entrance to the city-operated WestWorld event center. Like many public art projects, this one raised some eyebrows for its price tag – mostly because it was part of a multimillion-dollar renovation that went millions more over budget.

FOR SUBSCRIBERS:  How Phoenix artist Carrie Marill found the courage to face her fragility 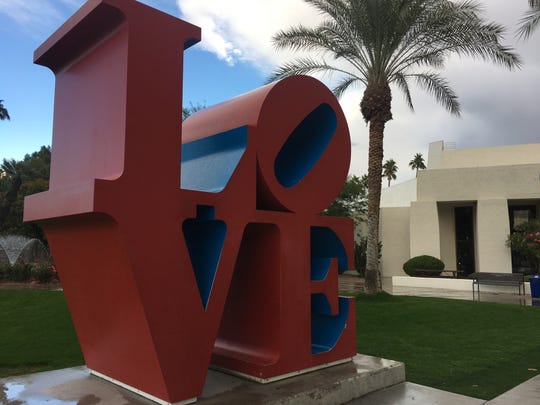 Pop artist Robert Indiana — who renamed himself for his home state — made his first “LOVE” sculpture in 1970 and pretty much turned it into a career, creating variations for everything from a U.S. postage stamp to a “HOPE” design that raised $1 million for Barack Obama’s 2008 presidential campaign. 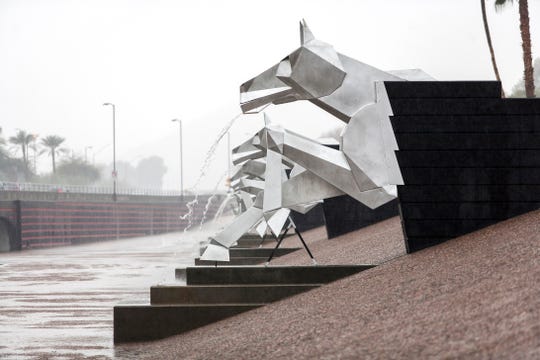 Did you know that a gargoyle is not technically a gargoyle unless it doubles as a waterspout? This bit of trivia is suddenly relevant because the angular horse sculptures (14-foot-high aluminum) on the banks of the Indian Bend Wash are, in fact, gargoyles. 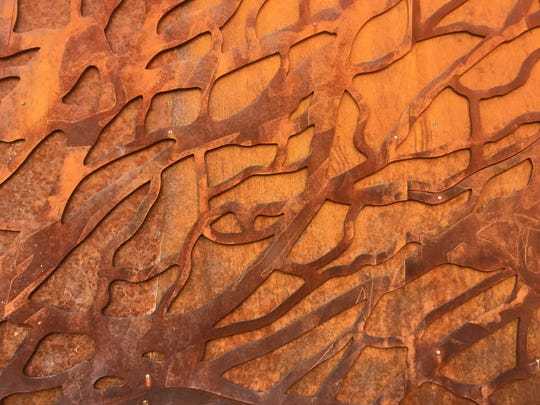 First, the library (2013, by Phoenix-based Richard and Bauer Architecture) is a work of sculpture in itself, inspired by the slot canyons of northern Arizona. “Desert Tracery” is the icing on the cake. It includes an abstract design on the “canyon” wall of the entryway, and in the central courtyard the organic pattern spreads to the windows and interweaves text drawn from a variety of languages, including the binary code used by computers and the four nucleotide bases of DNA. A metal sculpture reveals the inspiration for the squiqqles: a prickly pear cactus. 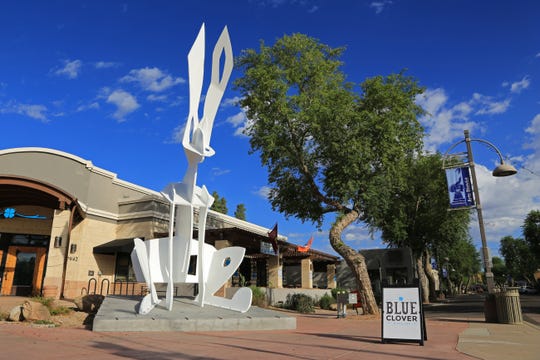 Like so many public art projects, this 26-foot-tall white rabbit (painted steel) had to jump through several hoops of mini-controversy before taking up residence as a selfie magnet. Artist’s statement: “One-Eyed Jack is a symbol of fecundity, rebirth, and like Lewis Carroll’s fictional White Rabbit, it beckons us to make the leap down the rabbit hole into Wonderland.” 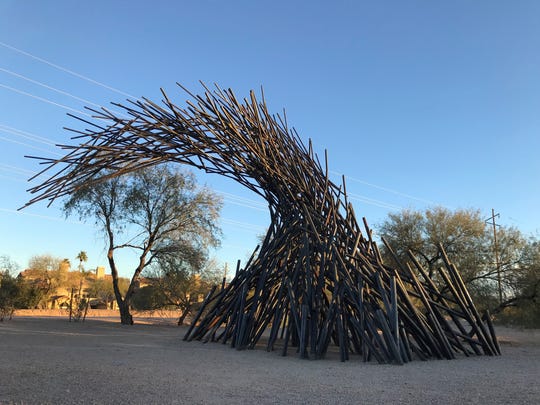 The title is literal: It’s a 24-foot wave (and two smaller waves building up to it) made of salvaged pipes. Recycling materials is the artist’s passion: He has made monumental sculptures out of bicycles and little red wagons.

Murals at the Redevelopment and Urban Design Studio 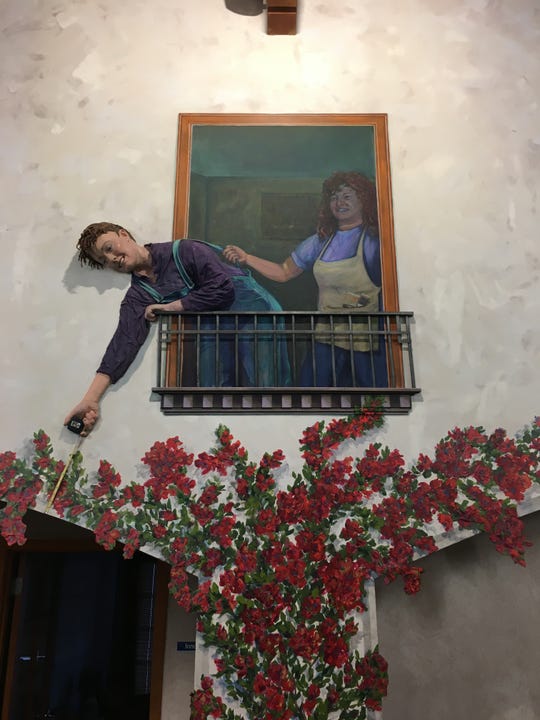 The interior of this city office is an open space with high walls, all of them painted, although not in the same style. Kollasch and Tuhey’s collaboration plays with 2- and 3-D imagery, with a life-size cat sculpture perched on a windowsill next to a faux “window” with a bearded man reaching into the room — part painting, part bas-relief. 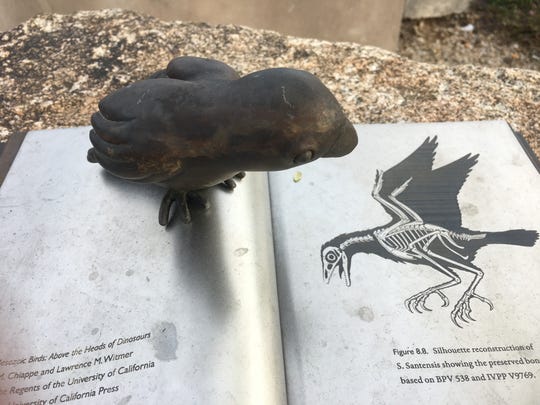 At the Mustang Library bus stop, riders are greeted by a small flock of metal finches, slightly larger than life size, reading from metal books. A few more can be found around the grounds of the library — along with the many real birds that unobtrusively make their homes there and inspired the artist to take this idea of shared space to another level.

Rhapsodic and Peculiar: 30 Years of Cy Twombly’s Sculptures at Gagosian

Museums Are Safer Than Any Other Indoor Activity, COVID-19 Study Says

How a Legendary Boxing Area Became a Lens for Los Angeles

NFT Art Goes Viral and Heads to Auction — But What...

The case of the missing sculpture – The Official Student Newspaper...

Sculptor Guide - November 13, 2019
0
Thanks for subscribing! Please check your email for further instructions.