Earlier this week, British artist Andy Link made headlines for claiming that Banksy’s sculpture The Drinker (2004), which was set to hit the block at Sotheby’s in London, was stolen from him in 2006. Now the auction house has responded—by yanking the sculpture from the sale altogether.

After maintaining that the seller had the right to put the work up for auction, Sotheby’s withdrew The Drinker from a curated contemporary sale taking place in London today. The sculpture had carried the highest estimate—£750,000–£1 million, or about $972,000–$1.3 million—of any work in the sale.

In a statement, Sotheby’s said, “The work has been withdrawn in agreement with the consignor.” The auction house did not offer further comment on its change in course. 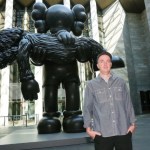 The Art Newspaper reports that Sotheby’s had told Link in a letter that it “would require a cogent and persuasive case, with appropriate evidence before—after taking instructions from the consignor—altering the planned sale process on any legal grounds relating to purported title claim by you.”

In a previous statement, Sotheby’s said it had “consulted both the Metropolitan Police and the Art Loss Register” to confirm that that the seller, who purchased the work from dealer Steve Lazarides in 2014, could legally offer it up for auction.

Link, whose longstanding feud with Banksy has previously been chronicled, has said he stole the street artist’s sculpture from its original location in central London in 2004. Link said that the work, which he had put on view in his own garden, mysteriously went missing in 2006 before it resurfaced at Sotheby’s this week. He claims he contacted the Metropolitan Police at the time of the theft.

The Metropolitan Police has said that it could not comment, as it does not have an active investigation into the matter.

The Gritty butter sculpture is here and it’s slightly terrifying

Reflecting on a Year of Vulnerability, Discontent, Hiatus, and Refusal

Sculptor Guide - November 20, 2019
0
Thanks for subscribing! Please check your email for further instructions.