The fly that landed on Vice President Mike Pence’s head last night during the debate has been making news (and memes) for the past 12 hours … but while it was surprising to see a fly land on Pence’s head and stay there for approximately 2 minutes, there’s some art historical precedence for flies making unexpected appearances and staying around a lot longer … scroll down below the picture to read more. 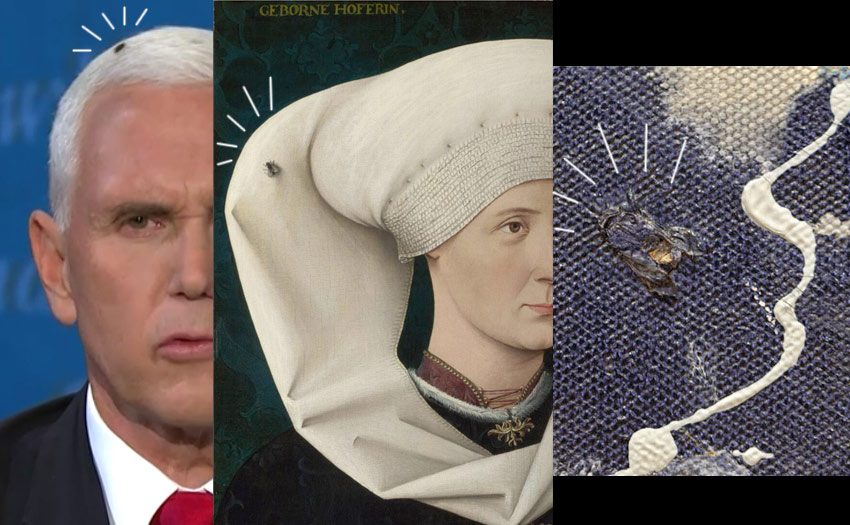 In addition to the fly in Mike Pence’s hair above left, we have a fly on a painting by an unknown 15th Century painter, as seen in the middle, and a fly on a Jackson Pollock painting, as seen on the right. I’ve heard some people say that they assumed the fly on Mike Pence’s head last night was actually on the surface of their tv screen, and they went looking for a fly swatter. The unknown artist who painted “Portrait of a Woman of the Hofer Family” (1470) may have wanted to trick his audience in the same way – the portrait as a whole seems like a traditional portrait, so one might think a fly has landed on the canvas. But in fact, it’s painted there … learn more about this odd painting in our Arts Investigation here.

In the case of the Jackson Pollock painting, we learned about that on a visit to MoMA a few years ago to hear a lecture by the Chief Conservator James Coddington. The museum was in the process of cleaning and conserving 3 canvases by Jackson Pollock in their permanent collection, and in doing so, they found a fly embedded in the paint of “One: Number 31” (1950). Think about it, Pollock was painting in his studio, dripping wet paint over the canvas … is it that odd to think that a fly might land on the wet paint and get stuck?

How to Recognize Right-wing Dog Whistles and Symbols, From Viking Hats to Flags

Much Ado About Nothing review: Key character goes missing in action

Windsor looking at new sculpture worth $170K for Jackson Park

Artsology is All Digital School Editors’ Pick – The Artsology Blog

Sculptor Guide - August 21, 2020
0
Thanks for subscribing! Please check your email for further instructions.