I saw an extremely interesting video about the Theodore Roosevelt Statue at the American Museum of Natural History. It discusses the controversial sculpture which depicts Theodore Roosevelt on top of a horse, flanked by a Native American Indian and an African man. It should be noted here that I reference an “African man” as opposed to an “African American man,” as the sculptor (James Earle Fraser) was indeed referencing a man from Africa, as opposed to a black man in America.

There are many strong opinions on both sides about whether to pull down or remove statues and monuments like this or whether to add footnotes or keep them as reminders of a flawed past. The reason why I like this video and highly recommend watching it is because the American Museum of Natural History presents calm and collected viewpoints from both sides, sometimes coming from people that one wouldn’t expect to have the opinions that they share. Some of the people interviewed include Philip DeLoria, a Professor of History from Harvard University who is of Dakota descent; a young African-American NYC student named Devyn along with her mother; Mabel O. Wilson, a Professor of Architecture and African American Studies at Columbia University, and a selection of museum visitors, among many others.

This is my own photo from in front of the museum from years ago … unfortunately, I only captured it from the side, so you don’t see the whole view, but you will see plenty more from all angles in the video. 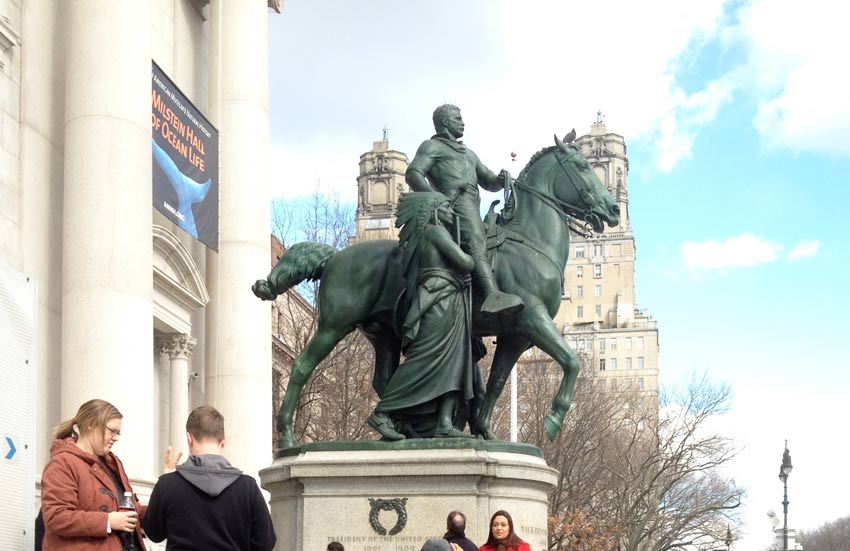 Note: just a little over a week ago, the American Museum of Natural History announced that they would be removing the sculpture from its position in front of the museum. It’s not clear where they are moving it to, and whether it will still be accessible somewhere in or around the museum, but you can read more about it here.

In SoHo, Artists Turn Boarded Up Storefronts Into Canvases

In SoHo, Artists Turn Boarded Up Storefronts Into Canvases

A painting that makes me think of July 4th – The...

Pianos as a motif for paintings – The Artsology Blog

Sculptor Guide - May 28, 2020
0
Thanks for subscribing! Please check your email for further instructions.