Academicians and students in the eastern Turkish province of Erzurum have created an ice sculpture full of cigarette butts to draw attention to the damage caused by smoking.

Taking advantage of the plummeting temperatures, students of Atatürk University’s Sculpture Department launched the project to draw attention to cigarette addiction and inform the public about its dangers.

In order to better highlight the dangers of smoking for the city’s residents, the group spent two months working diligently to collect a huge number of cigarette butts and encapsulate them in a column of ice. 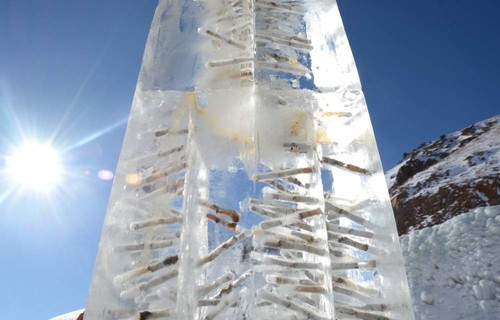 “While preparing this project, our students went to many local coffeehouses and public areas in the city to collect cigarette butts and other related waste. While doing so, they informed people about all the health issues caused by smoking to raise awareness and then got down to sealing the waste in ice. The students used ice as a symbol for the human body,” he said.

Caner Şengünalp, a faculty member and director of the study, stated that their aim was to show smokers how the inside of their bodies might look. “It will be (even more) interesting after the nicotine and cigarette butts start to leech out and create a filthy sight,” he added.

Smoking rates are on the decline across Turkey, yet the deadly addiction still takes a heavy toll. The country spends a whopping $25 billion annually on smoking, either in terms of the tobacco itself or treating the diseases it causes. According to the Fight Against Smoking Association, the public spends $15 billion per year on cigarettes.

Smoking is known to cause lung cancer and other respiratory illnesses and is a major risk factor for cardiovascular diseases such as stroke and heart disease, as well as for mouth, throat and other types of cancer.

Every year, more than 8 million people die from tobacco use, according to World Health Organization (WHO) data. More than 7 million of those deaths are from direct tobacco use, while around 1.2 million are due to nonsmokers being exposed to secondhand smoke.

A View From the Easel During Times of Quarantine

The Rise of the Machines

Sculptor Guide - December 12, 2019
0
Thanks for subscribing! Please check your email for further instructions.