Special to the Press 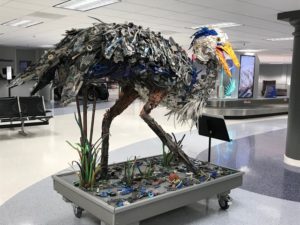 Most of us love the ocean, live near it or wish we did. For artist Connie Lovell, who lives in Harlingen, the ocean is her “heart and soul.”

Lovell was so bothered by trash on the beach left by beach goers, trash that washed ashore, and trash in our oceans that,  in the early 80’s, Connie became involved in the Ocean Incineration of Toxic Waste, where she met Sarah Kulungowski. Both Lovell and Kulungowski were advocates for cleaning up oceans and beaches – a mutual passion that would 35 years later lead to forming Washed Up Texas.

Lovell has created beautiful, mesmerizing sculptures from trash on the beach that washes ashore, with some sculptures as small as masks and as large as seven feet tall, 4 feet wide and weighing as much as 450 pounds. If you look closely at her sculptures, you will see the creativity that evolved from trash – plastic bottles, bottle caps, shoes, flip flops, brushes, sand toys, lighters, metal cars, trucks; the list goes on. The only paint used on the sculptures is on the stainless steel screw heads, to match the color of trash items.  Lovell creates these sculptures because, she says, art speaks to people and the message when viewing the art is clearly understood.

Kulungowski’s role in Washed Up Texas involves working with various volunteer groups that pick up and wash the trash, as well as, promoting Washed Up Texas at local events. Volunteer groups include the Texas Master Naturalist group from Rio Hondo. Their members volunteer to pick up trash and are able to earn credit for their volunteer hours, which helps them maintain their status in the group. Kulungowski is currently working with retired teachers that are part of this group in an effort to start doing school presentations for students. 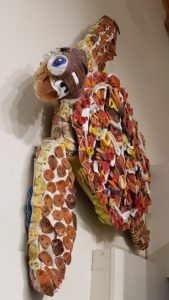 Josie the Loggerhead displayed at Sea Turtle and donated by artist Connie Lovell. Josie was created from over 154 pieces of trash. Photo by Angie Gamez.

“Perhaps that one student that sees the sculpture will one day become the scientist that comes up with alternatives to plastic and how to break down the plastic that currently exists,” Kulungowski said.

Washed Up Texas has also partnered with the Cameron County Juvenile Justice system in San Benito. About 8 to 9 cadet volunteers that are on home detention helped pick up trash, drill bottle caps and make water splash with clear bottles during Beach Cleanup Day. All trash is cleaned using vinegar and water to kill bacteria.

Josie the Loggerhead is on display at Sea Turtle, Inc., a donation by Lovell. About 154 pieces of trash were used to create Josie the Loggerhead.  Dolly, the Bottlenose Dolphin, had been on display at the Native Plant Center but is now home with Lovell where water and splash is being built underneath her. Other sculptures will be built for future events.

For more information, go to www.washeduptexas.org.

This dynamic parking garage doubles as a public sculpture

Remains of Courageous Archaeologist Beheaded by ISIS Found in Syria

New at the sculpture park

Sculptor Guide - October 29, 2019
0
Thanks for subscribing! Please check your email for further instructions.